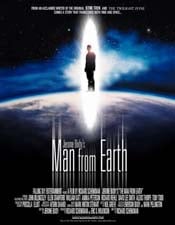 All the attention for his film was boosted by a positive review on RLSlog, a weblog that reviews some of the new releases on BitTorrent. It turns out that a lot of people who downloaded the movie off BitTorrent liked the movie, as they started to write positive reviews on Amazon, IMDB and other websites.

Wilkinson was pleasantly surprised by all the attention. He explained in his email to RLSlog that the people who illegally downloaded his film actually helped to promote it.

He writes: “Our independent movie had next to no advertising budget and very little going for it until somebody ripped one of the DVD screeners and put the movie online for all to download. Most of the feedback from everyone who has downloaded “The Man From Earth” has been overwhelmingly positive. People like our movie and are talking about it, all thanks to piracy on the net!”

To illustrate this, on IMDB the film received close to 700 votes with an average rating of 8.2 which makes it one of the most popular movies of the last 2 weeks.

Wilkinson continues to praise the pirates and adds: “What you guys have done here is nothing short of amazing. In the future, I will not complain about file sharing. YOU HAVE HELPED PUT THIS LITTLE MOVIE ON THE MAP!!!! When I make my next picture, I just may upload the movie on the net myself!”

This example once again illustrates what a powerful promotion tool filesharing networks are, especially for independent productions with a small budget.