While BitTorrent remains the most used peer-to-peer method of obtaining video content online, for the past several years the availability of cheap bandwidth has provided users with additional options.

Closely associated with sites such as YouTube, streaming is now one of the most popular ways of viewing content. Thanks to a player embedded in a webpage no special skills are required. As a result, streaming sites have popped up all over the web, with a sizable proportion dedicated to copyrighted content.

However, to be really useful all of this content needs to be findable and that’s where sites such as Project Free TV (PFTV) stepped in. Indexing popular content from all around the web, PFTV presented TV and movie content to the masses in an easily navigated interface with hit shows such as Game of Thrones and The Walking Dead just a click away. 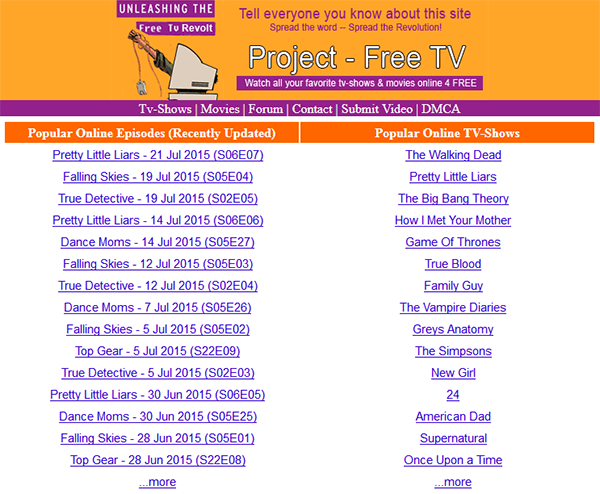 As a result of its attention to detail, comprehensive database and a loyal following, PFTV grew to become one of the most popular sites of its kind. Its popularity attracted the attention of copyright holders too, with Hollywood having the site blocked in the UK during November 2013.

Last evening, however, it all came to an end. Instead of its familiar yellow, orange and purple homepage, PFTV now displays a single word: “Goodbye”

Since Project Free TV had become the go-to place for millions of TV fans, the site’s users were quick to react, with dozens taking to Twitter to express their disappointment. 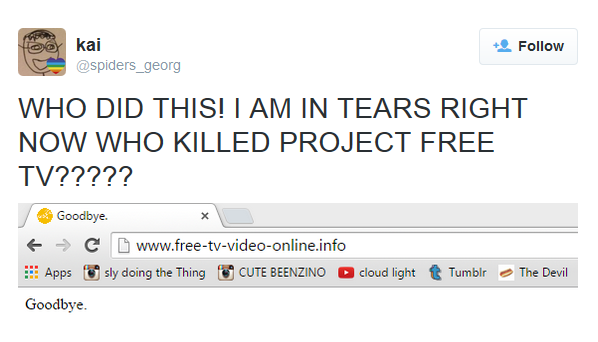 But for many it is the site’s content discovery features that will be most missed.

“What I loved about Project Free TV was the aggregating feature of their daily TV show list,” a former user explains.

“While not a complete representation by far it had most of the shows I was interested in and introduced me to many excellent British and Australian shows I did not know of as well as plenty of new shows from the US I wasn’t aware of due to practically not ever seeing commercials for them on broadcast or cable.”

While most people enjoyed the site via its web presence, Project Free TV was also a massive hit with users of Kodi/XBMC. Thanks to a third party plugin located at TVaddons.ag, PFTV’s library could be enjoyed from within the software. Users now experience errors instead.

“It’s sad to see them go, our community is definitely in shock. However, it’s good to see that they closed while still on the top of their game, on their own terms,” a senior developer at TVAddons told TorrentFreak.

“There are a lot of other sites offering similar services and I’m confident that users who were dedicated supporters of Project Free TV will likely find a new home elsewhere in the coming days.”

Users searching for PFTV using Google will already find plenty of sites using the Project Free TV name but most are clones with reduced functionality. At best, those claiming to be the real deal aren’t being straight while others appear to be more interested in serving up malicious advertising than providing a decent service.

Project Free TV’s operator did not respond to our requests for comment.