PRS for Music is a UK outfit that collects royalties for more than 150,000 members, including songwriters, composers and publishers.

The organization also takes an active stance against piracy. Five years ago it rolled out the Member Anti-Piracy System (MAPS) which tracks down infringing content on the web and sends takedown notices to associated sites.

This week PRS is looking back at the performance of its system thus far. According to the organization, MAPS has reported 6.7 million URLs to sites that host or link to pirated content. In addition, search engines Google and Bing were asked to delist an additional 424,000 links. 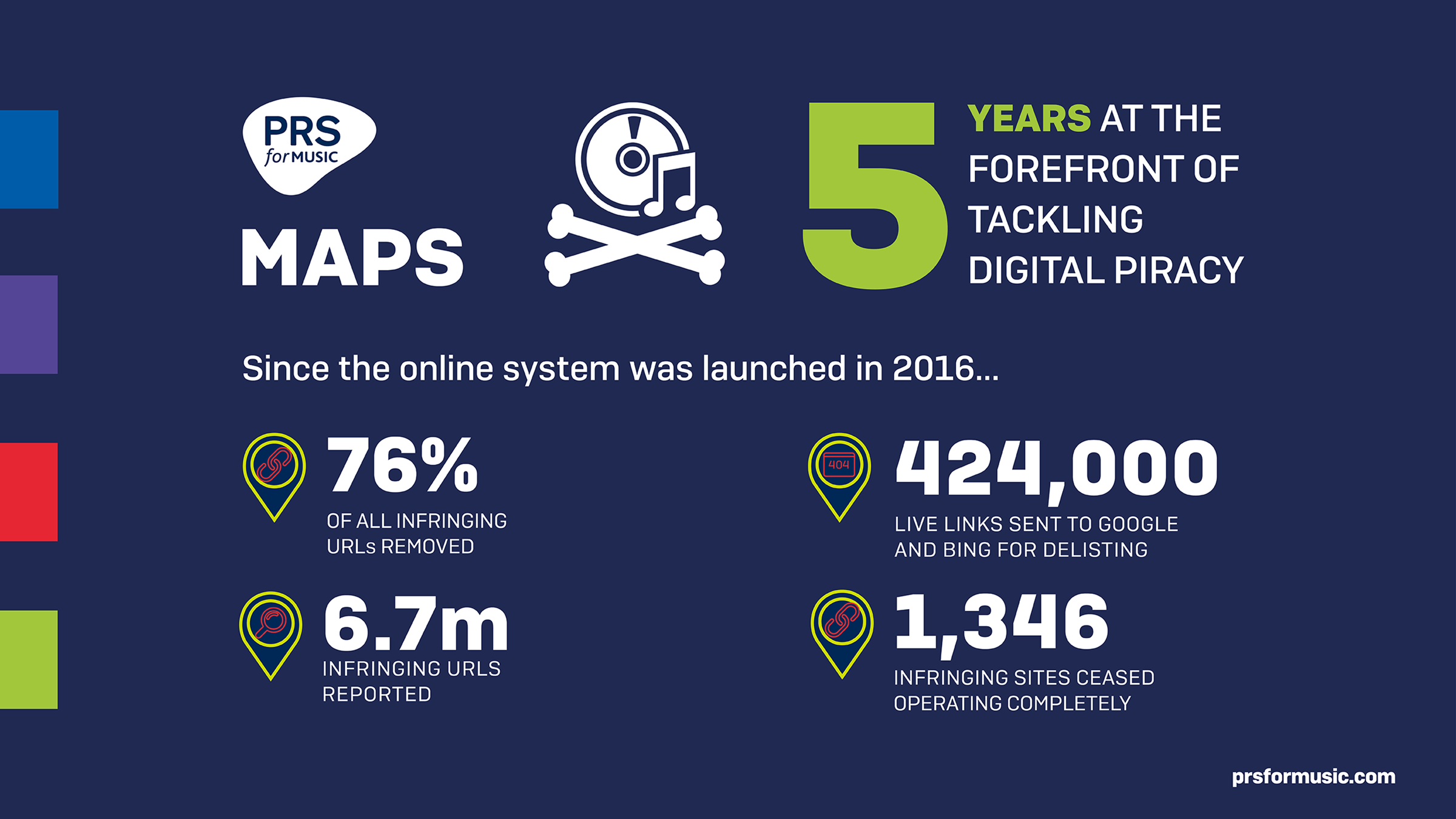 These are big numbers but in the grander scheme of things they are relatively modest. Google alone processes over a million takedown requests per day and the volume of PRS requests represent only a tiny fraction of the total.

That said, the music group did share some additional details that caught our eye. Of the 6.7 million takedown requests that were sent to hosting or linking sites, 76% were indeed removed. That’s a decent result, given that many pirate sites ignore takedown notices.

Reporting Sites to the Police

PRS further notes that the sites that ignored its notices did not necessarily get away with that. The group writes that “non-compliant sites” are referred to the City of London Police’s Intellectual Property Crime Unit. These referrals reportedly had quite an effect as well.

“We are pleased that MAPS has allowed us to protect the value of our members’ music. It has also led to the demise of hundreds of illegitimate services,” PRS for Music’s Simon Bourn says.

In their press release, the music group is even more specific, noting that its efforts were “instrumental in forcing 1,346 infringing sites to cease operating completely.”

Unfortunately, PRS doesn’t share any further details on the types of sites it helped to take offline. We are not aware of any sites that have shut down as a direct result of PRS-related pressure. PRS told us that they would try to get additional details on this issue (see update below).

Sharan Ghuman, Rights Protection Manager at PRS for Music, is happy with what MAPS has achieved over the years. It has helped members to tackle millions of copyright infringements and also provided important data for law enforcement.

“The tool was built to empower our members to carry out enforcement action on their chosen repertoire and their dedicated commitment and usage of the system has been key in MAPS’ success,” Ghuman says.

“MAPS is not only a notice and takedown tool, it has proven to be a great information source, providing valuable data in other areas of rights protection work, specifically in relation to our work with the City of London Police Intellectual Property Crime Unit,” she adds.

While the press release suggests that there’s a causal link between the enforcement efforts and the ‘shutdowns’ it appears to be more circumstantial.

“We believe that the constant notice sending is effective in forcing sites, or hosting providers to shut down sites,” PRS for Music informed us.