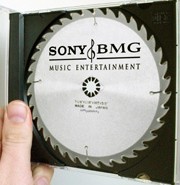 During 2005, Song BMG introduced a new copy protection mechanism on its audio compact discs. The Extended Copy Protection system, better known as XCP, was included on around 50 titles. It was to cause a huge scandal.

Once one of these legitimately purchased music CDs was put into the PC drive of a Sony customer it automatically installed software on Windows computers which changed the way the operating system played files, installing a rootkit on the host PC.

Adding insult to injury it was discovered that Sony had used code created by Jon Lech Johansen (DVD Jon), violating its GPL license.

Following these frankly unforgivable actions by Sony, the company was forced to recall all affected CDs and was subjected to various lawsuits. One such legal action has just come to an end.

According to Germany’s Heise, a district court has just ruled in a case where an individual claimed that the presence of the Sony rootkit caused him financial losses.

After purchasing an Anastacia CD, the plaintiff played it in his computer but his anti-virus software set off an alert saying the disc was infected with a rootkit. He went on to test the CD on three other computers. As a result, the plaintiff ended up losing valuable data.

Claiming for his losses, the plaintiff demanded 200 euros for 20 hours wasted dealing with the virus alerts and another 100 euros for 10 hours spent restoring lost data. Since the plaintiff was self-employed, he also claimed for loss of profits and in addition claimed 800 euros which he paid to a computer expert to repair his network after the infection. Added to this was 185 euros in legal costs making a total claim of around 1,500 euros.

The judge’s assessment was that the CD sold to the plaintiff was faulty, since he should be able to expect that the CD could play on his system without interfering with it.

The court ordered the retailer of the CD to pay damages of 1,200 euros.