RIAA Reminds Me of The Mafia, says Musician 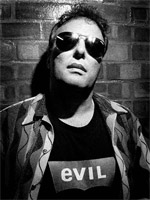 Born Eric Reed Boucher in 1958, Jello Biafra is no stranger to controversy. He first became well known as songwriter and lead vocalist with the band Dead Kennedys. The band split in 1986 but 1998 saw the start of a six year battle over the royalties to the band’s music. No doubt this was a miserable experience, so maybe Biafra’s outburst this week was to be expected.

In a translated interview with Norway’s Aftenposten entitled “Goebbels Would Be Proud”, Biafra tells us a little bit about how he feels about the RIAA, big record labels and even the media. He isn’t pulling any punches either.

“I have two different opinions on file-sharing” says Biafra, drawing a metaphorical line in the sand – with good (small labels) on one side, and bad (big labels) on the other.

“You may take from the big labels,” he orders, “because the only thing they do is steal from both the artists and the audience.” Not many would disagree with you there, Jello.

The ‘good’ side are the small guys, explains Biafra to potential file-sharers: “Don’t take from the smaller, independent labels. Then fantastic bands would have to surrender way too early, because they can’t afford it,” he says, whilst completely forgetting that popularity fills concerts and downloads are a good way to achieve that these days. According to MAMA Group who manage the Kaiser Chiefs and Franz Ferdinand, future profit is there to be unlocked – and it lies in the live concert. Popularity through free downloads could be the key to these, time will tell.

“Support the independent labels, but the big ones ,fuck’em. Anyways, I haven’t found anything in many years which come from a large label worth buying” says Biafra, as he tosses aside his attacks on singular big labels and gets his teeth into the collective might of the RIAA:

“The RIAA reminds me most of the Godfather,” Biafra says, tipping his head to the side and changing his voice to Marlon Brando mode:

“We will sue you. If you want out of this without going to court, we can make an arrangement: Give us $5000. If not, you will find a horses head in your bed.”

Suddenly he is back to being Jello Biafra again, and talks about why RIAA action against file-sharers is wrong: “They are doing this to 12 year old girls, they are doing it to 80 year old women, and they do it to students. There are plenty of examples that show people having to quit school because they had to give all their money to the recording industry instead,” he says gravely.

Biafra then explains that he doesn’t do any downloading himself as he doesn’t have a computer before launching himself at the media: “It’s so dumb, that even the American edition of CNN is just a bunch of right-twisted parrots babbling about the primary elections, letting the war in Iraq pass in silence. Then it is up to the artists to fill the void.”

Then, in a final show of support for the small guy, Biafra concludes: “When smaller performers express their political views they are gagged. But when Mel Gibson or Arnold Schwarzenegger does it, then it’s okay. Because they fit better into the media profile.”

“Goebbels would be proud.”

For those who haven’t seen it yet, here’s a RIAA training video, that may give some insight into the organization.