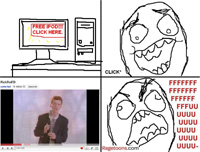 Anyone who has spent much time online, especially on Internet message boards of any kind, will be aware of Rickrolling.

It’s an incredibly simple concept. The meme is based on a bait and switch, whereby someone posts a hyperlink which allegedly provides content relevant to the current discussion, but in fact leads to the 1987 Rick Astley song “Never Gonna Give You Up” instead.

People who follow these links and end up viewing the song/video are said to have been “Rickrolled” and over the years millions of people have been fooled into doing so. However, those falling into the trap today are being met with something not nearly as entertaining and, if it’s even possible, something that is even more annoying.

Due to a copyright complaint, the original Rickroll video has been removed from YouTube. 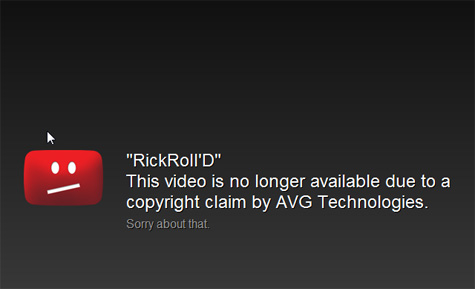 Taking down a five-year-old video with tens of millions of views is strange enough, but it is far from clear why AVG Technologies – the people behind AVG Anti-Virus (?) – would want to do so at all.

Hopefully there has been some terrible mistake and everything will be sorted out soon. If not, the consequences could be unpredictable. The Rickroll meme started life on the notorious 4chan message board in 2007 and developed into a worldwide sensation from there, and as we all know that particular community is not known for its patience, nor lack of creativity when it comes to revenge tactics.

This is not the first time that the Rickroll video has been removed though. It was removed by YouTube in 2010 but reinstated shortly afterwards.

Update: After being blocked for 24 hours, the video is now back. We’re still waiting for an official explanation on what happened.