When Vladimir Putin’s tanks and an estimated 200,000 troops began to roll across the border on February 24, 2022, his military expected swift subjugation of Ukraine.

Four weeks later amid massive loss of human life and widespread destruction, things are not going to plan for Russia, militarily or economically.

An unprecedented sanctions package aimed at deterring Putin has plunged Russia’s economy into crisis and in common with Russia’s bombs hitting innocent civilians in Ukraine, sanctions are also affecting those opposed to the war back home.

Gamers and Gaming Part of the Fallout

In early March, reports from Russia indicated that sanctions targeted at the financial sector were having an immediate effect on both game developers and gamers alike.

Steam developers in the country distributing games through Steam discovered that they would not be receiving sales income from the platform due to their use of state-owned banks. Opportunities exist for developers to switch to unsanctioned alternatives but the situation is fluid and offers no guarantees.

The situation for gamers isn’t great either. Visa and Mastercard previously announced that locally-issued cards would no longer work outside Russia. This is a problem for Russian gamers who rely on these cards to buy games from Steam.

With all parts of the gaming chain facing disruption, a developer in Russia has come up with its own solution to get its product into the hands of gamers.

Four Quarters – Developers Against The War

Russia-based software developer Four Quarters is the talent behind Loop Hero, an endless RPG that quickly racked up 500,000 in sales before going on to even greater success. According to SteamSpy, as many as two million people bought the game following its release in 2021 but those wishing to buy it in Russia via Steam face serious problems.

With emotions relating to the conflict riding high online, it’s worth pointing out that Four Quarters is firmly against the war. Since February 24 the company has made its opposition clear but that hasn’t made any difference to its ability to sell the game in Russia via Steam or gamers’ ability to buy it.

So, in a move that removes all financial transactions, banks, cards and official distribution channels from the equation, Four Quarters is now encouraging gamers to install a BitTorrent client and pirate Loop Hero instead.

Better Hop On To RuTracker

As Russia’s most popular torrent site, RuTracker has its own set of problems with Russian authorities. Nevertheless, it is likely to become increasingly popular with Russian users as options to buy content become more limited. That includes those who would like to play Loop Hero too.

In an announcement on Russian social network VK, Four Quarters urges everyone to “help raise the pirate flag” by downloading Loop Hero for free, no strings attached. 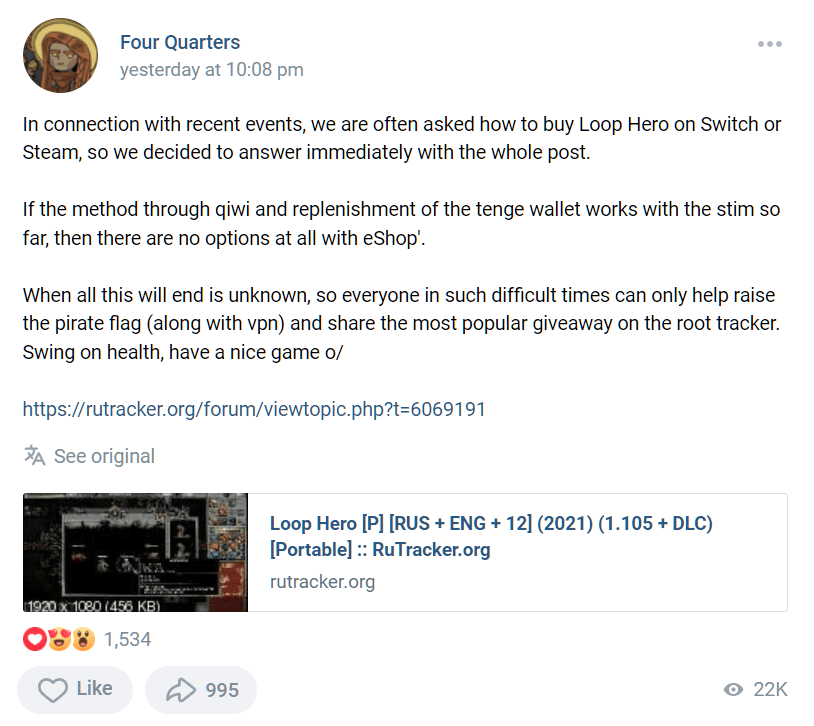 The announcement carries a link to the relevant page on RuTracker where the free giveaway is welcomed by some, but not necessarily by all.

Demonstrating the divisions caused by war, comments on the game giveaway range from respect and thanks to allegations that the developer has somehow betrayed Russia. It’s just a small sign of the problems Ukraine and the entire world faces as it emerges from this disinformation and propaganda-fueled tragedy.

Finally, after “escaping” from Russia to nearby Georgia earlier this month, one of the developers at Four Quarters is now able to speak freely. The box is empty, he says, but might not stay that way for long. 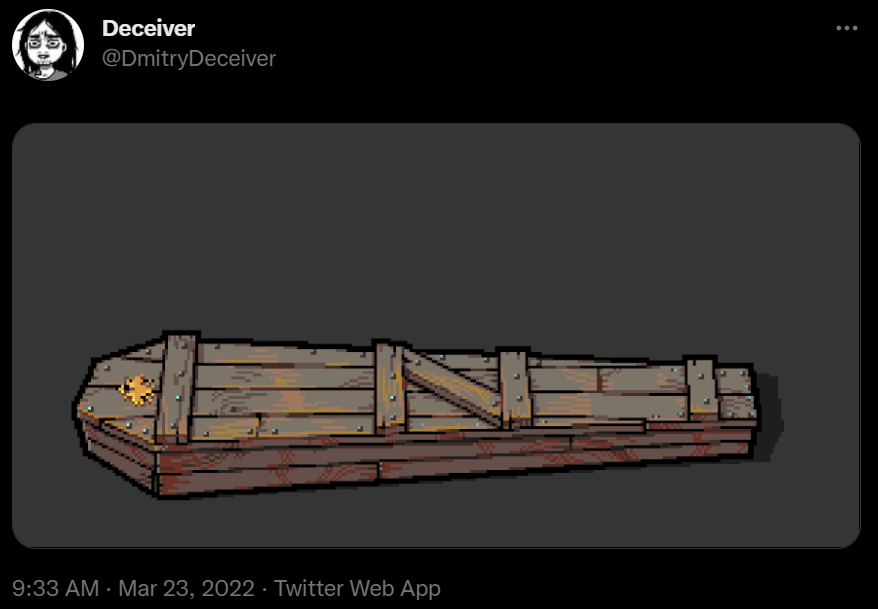