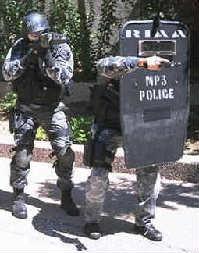 The RIAA has sent a number of John Doe lawsuits to court targeting a wide range of universities and individuals. over 17,000 have been confirmed, but some estimate the real number to be around 30,000. While most lawsuits are set to random, everyday people, a significant percentage have been specifically targeting college students.

It’s no secret that universities are an easier target than commercial ISPs. To universities, Internet connections are a bonus, not their main income source. They also have a wide range of topics to deal with, not just Internet related issues. So, for a few thousand students, there may only be one or two people dealing with copyright infringement, as part of their duties. They may even be unaware of the law, often being IT people drafted to do legal work.

Some universities are fighting back, however, from University of Wisconsin schools refusing to pass on ‘pre litigation letters’ to its students, and now, interestingly, University Of California – Santa Cruz (UCSC) has put a spanner in the procedural works of the RIAA litigation machine. As explained best in the article published a few months ago by RIAA ‘nemesis’ Ray Beckerman, the John Doe lawsuits are often just a legal ploy to get names and addresses, prior to starting a new campaign, and pre-litigation settlement.

However, UCSC has successfully argued that under the law – specifically the Family Educational Rights and Privacy Act (FERPA) – there are restrictions on the conditions for releasing student’s personal details, even in cases where there is a court subpoena. In this case (UMG Recordings v Doe), the court has ruled that the subpoena must have a ‘reply by’ date that is long enough to allow the university to notify the target of the subpoena, and their parents. This can give them the chance to get legal advice which can put them in a stronger position with the RIAA than getting a letter/demand out of the blue.

Of course this is not the first time the RIAA has had such a set back. In 2004 a similar case on the other side of the country, found that the University of Pennsylvania should send a notice to the accused John Doe targets, and give them the chance to quash the motion. If such a motion is not filed within 21 days, the identity is revealed, but if one is filed, the identity is kept hidden until it is dealt with. It would appear, though, that this is only applicable to the ‘Eastern District of Pennsylvania’ and not to the country as a whole.

It is not clear why the courts around the US do not give as much consideration to the accused as to the accuser in these cases, or why they don’t find it necessary to require a defendant to be notified about a case they are a defendant in. UCSC had to fight for what should be considered ‘bare minimum’. In a system where winning generally means having more evidence in your favor, excluding one side from participation means it will always go against them – is that really what the law is about?