“Saw” Director Explains Why He Was Worried By BitTorrent 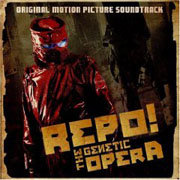 On Thursday we reported that the director of the ‘Saw’ sequels was rallying support for a novel way to tackle piracy, by encouraging fans to upload fakes to BitTorrent. The director, Darren Bousman, who admits to not being particularly Internet tech-savvy, was doing his best to protect the soundtrack of his upcoming movie, Repo! The Genetic Opera, from Internet piracy.

The report caused quite a stir, with dedicated Repo! fans, known as the ‘Repo Army’, angry at BitTorrent users for “stealing” their soundtrack (more about why this is so important to them later) and BitTorrent users angry at the Repo! fans for trying to mess up their torrent sites with fakes.

Director Darren Bousman has since told his fans to leave BitTorrent alone, and there even some torrent users having friendly chats on the Repo! forums now. To see things from ‘the other side’, we caught up with Darren to find out exactly why this soundtrack is so important to the Repo! fans.

TF: Please introduce yourself to the TorrentFreak readers.

dlb: Most of you know me from the SAW films. But long before SAW I was directing this little stage play called Repo! The Genetic Opera. It was the first thing I ever read that spoke to me. I have been fighting to get it made [as a movie] ever since. It’s been a long long road – and only now, after the success of three SAW films am I able to get Repo! off the ground.

TF: What makes it so different to your previous work?

dlb: Repo! to me was about doing something completely different. I had directed three sequels. I am proud of the SAW films, but I wanted to do something unique. Repo! is that. A lot of people will hate Repo!, a lot will love it. I will admit it’s polarizing. But I wouldn’t have it any other way. Repo! is so different than SAW in every single aspect. I hope people give it a chance, and don’t prejudge it because of certain cast members they may dislike, or on the mere fact people ‘sing’ in it.

TF: You’ve gone on record saying that you feel very protective of the movie, as if watching over a child’s first day at school, and that’s understandable. The actual movie comes out on November 7th, however, you asked the fans to concentrate on ‘protecting’ the soundtrack instead. Could you explain why this soundtrack is so crucial to you, your fans and the upcoming movie?

dlb: I am not some muti-millionaire – and sales of this album will affect me personally. I have been begging and pleading to get this movie made since 2001. I have fought, burned bridges, sacrificed relationships, and even ended relationships all based on Repo! Why? Because I believe in the project so much. I put all my resources into making this movie. However through the entire course of making it I was told IT WOULDN’T work, that there wasn’t an audience for this. I have been met with constant opposition. At one point there was talk of not even releasing a soundtrack. I fought, screamed and fought some more to get this small release we have – on Amazon, iTunes and other downloadable sites. This was a way to gauge the interest in the film. I did this to show all the nay-sayers LOOK at our numbers. Look at the reactions.

TF: You told Alternative Film Guide that Repo! was so weird, out of the box, and avant garde that people didn’t know what to make of it. It sounds like getting people outside the mainstream familiar with the movie might be a challenge. How would you feel if thousands downloaded this soundtrack for free via BitTorrent but a proportion of those loved it and turned up at the theater as a paying customer?

dlb: I wish it worked like this but for this film it doesn’t. That’s why I had the reaction I did when I heard it was being downloaded for free. The release of Repo! is only in 6 theaters. SIX THEATERS. Even if I sold out EVERY single show – in every single city – for the entire run, it still wouldn’t make the money it needs to make. Sales of the soundtrack are the only way to prove if this film registered with fans. Our hope was – the sales would be so good on the soundtrack – we would get more theaters. More screens, more showing. Repo! will not be in the majority of cities, or countries. Its only in three cities. THREE CITIES. This album was our way of showing those in charge there is an audience for this.

TF: Could you tell us about your hugely dedicated fans, the ‘Repo! Army’ ?

dlb: These are the greatest fans I have ever come across – the most loyal people I think I will ever meet. These people weren’t hired by me. They found Repo! A good portion of the Repo! Army has seen the movie through various festivals. And the movie spoke to them. Since I don’t have the support of most movies – I turn to them to help spread the word. I never realized how passionate they were until recently when they turned out in droves to Austin Texas to see a screening of Repo! They are as passionate about Repo! as your users are about file sharing.

TF: Of course, BitTorrent fans can spread the word for you too. An interesting group have been vocal in emails to TorrentFreak – the Repo! fans who are also BitTorrent users. Are you surprised that some of your fans in the ‘Repo Army’ are buying your material with a passion, yet appear to be using BitTorrent too?

dlb: No, not at all. I am sure tons of people use these sites. The sad fact with Repo! is that every person who purchases the album for $9.99 is making a big statement. And these statements are going to be be the difference between Repo! playing in six theaters, or seven. To the mass population this will seem trivial – but for us, who have very little support or marketing. One paid download is huge.

TF: Thanks for speaking with us Darren, and we wish you well with the movie.

The brief storm that blew up between the opposing groups has largely died down now, after being dampened by Darren’s request to his fans to stop actions against torrents. After much correspondence with Darren it seems clear to us that he never really intended to hurt BitTorrent, but acted passionately in his role as the ‘protective father’ of the movie, not as some greedy corporate fat cat.

Darren told TorrentFreak that he was sorry that his actions offended some BitTorrent users, adding “Just understand, we are not the studio system. We are not the major corporation. We are a group of people who have been fighting to get something made only to see it released in just 6 theaters.”

It’s not hard to see why this movie and its soundtrack has raised such passions, when years of planning, investment and dreams rest on the success of such a small release window. However, in the absence of a huge marketing investment by Lions Gate, the movie will live or die by word of mouth and magnitude of Internet ‘buzz’.

Big named movies and albums gain less from the publicity offered by piracy than smaller productions desperate for exposure, so at least on the surface, Repo! seems an ideal candidate to benefit. It will be interesting to see how much success this movie gets, and if the piracy situation mirrors that. Hopefully, if the Repo! soundtrack does get downloaded a lot – and loved – those six theaters will be full and extended to more, which can’t fail to boost January’s DVD release.

Of course, when you rely on companies like Lions Gate to get even 6 theaters, admitting that piracy might help isn’t going to go down too well.