While many content creators believe that taking down pirate links will make their material harder to find, the value of this endless task is often questioned. As content spreads like a virus, links often reappear elsewhere as fast as they are taken down.

The response has been to send more and more takedown requests and the end result of that has been mixed to say the least. While the music industry does a pretty accurate job despite sending tens of millions of notices, smaller players tend to embarrass themselves regularly with ridiculous claims against clearly non-infringing domains.

Today its the turn of DMCA Copyright Enforcement, an anti-piracy company who claimed to be working on behalf of adult media company Cybertania Inc, the operators of the myfreecams.com website. DMCA Copyright Enforcement started sending DMCA notices to Google on Cybertania’s behalf on May 13. It didn’t go well; the first 999 URL notice was rejected in its entirety by Google.

Update: Please see note at the end of this article. Cybertania are an innocent party having being fraudulently represented in Google’s Transparency Report by an imposter. They did not hire DMCA Copyright Enforcement to process any takedowns and the erroneous takedowns listed in this article are not Cybertania’s responsibility.

The notice that caught our eye, however, shows just how bad things can get when an anti-piracy company sets its dumb bots loose but fails to properly check on their work. First up to be accused of hosting pirated cam content, The Library of Congress.

So what pirated and filthy content is to be found behind this innocent looking URL? The Charleston Daily News apparently – from October 7, 1871. 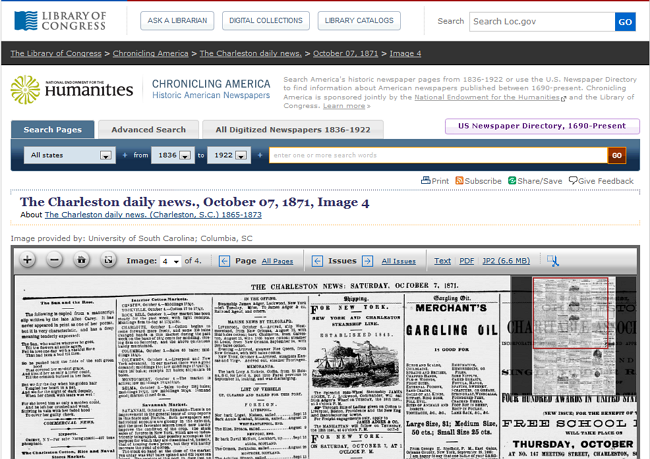 With a fuse clearly blown, the bots’ next stop was the profile page of The Reverend Alicia R. Forde at the Unitarian Universalism religious movement. Judging by the number of camgirls by the name of “Alicia” (and close variants) in the DMCA notice, it seems pretty clear what the poor Reverend’s crime was.

Now out of control, the bots headed off to Google’s product forums and a page on Ripoff Report for no apparent reason, stopping by at Newspapers.com to try and censor copies of The Kane Republican from May 14, 1958, the El Paso Herald-Post from May 1962 and the Miami Daily News from November 1941. And a copy of Farmer’s Wife from 1921, just for good measure.

Things then got really weird when the bots attacked some technical sites including Website Informer, Domain Tools’ DNS reporting service DailyChanges.com and Github.

After hitting search results on eBay (because they contained the name “Sonia”) this hugely embarrassing URL on The Daily Mail was up next, a clear attempt by the anti-piracy outfit to turn the site’s own search engine against itself.

The worst part of this sorry episode is that the items detailed above do not amount to a fully comprehensive report on all the disasters present in this single notice, there are many, many more.

In fact, since the middle of May around 15 notices containing approximately 1,000 URLs each have been rejected completely by Google with only eight making it through relatively unscathed. According to Google, four notices were so bad as to be marked as a potential abuse of the DMCA process.

Update: Since the publication of this article, Cybertania have been in touch to explain that the notices being sent out in their name are fraudulent. The company adds that they have not hired “DMCA Copyright Enforcement” (whoever they are) and suspects this outfit is deliberately trying to hurt the SEO of other sites. Google has been informed.