During the summer of 2011 the MPAA and RIAA teamed up with five major Internet providers in the United States, announcing their a plan to warn and “punish” BitTorrent pirates.

The parties launched the Center for Copyright Information (CCI) and agreed on a system through which Internet account holders will be warned if their connections are used to commit copyright infringement. After five or six warnings ISPs may then take a variety of repressive measures.

Initially the first ISPs were expected to send out the first “copyright alerts” by the end of 2011, but for reasons unknown this deadline silently passed, as did the revised July 2012 start date.

When leaked AT&T documents cited November 28 as the planned start date CCI confirmed that the first alerts would indeed be sent out late 2012, but today the group announced yet another delay.

“Due to unexpected factors largely stemming from Hurricane Sandy which have seriously affected our final testing schedules, CCI anticipates that the participating ISPs will begin sending alerts under the Copyright Alert System in the early part of 2013, rather than by the end of the year,” CCI’s Executive Director Jill Lesser explains.

“We need to be sure that all of our ‘I’s are dotted and ‘T’s crossed before any company begins sending alerts, and we know that those who are following our progress will agree,” Lesser adds. 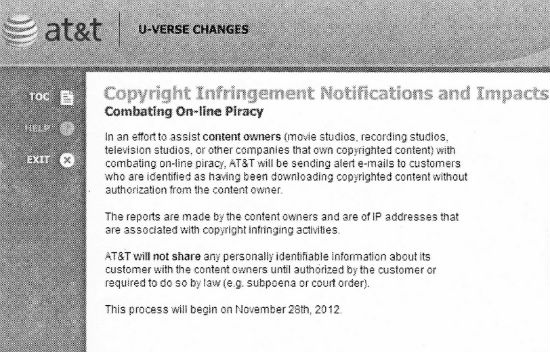 It’s unclear how Hurricane Sandy affected the launch, but it’s unlikely to explain the delay of more than a month.

TorrentFreak has learned that the main problem is to get all actors, including the ISPs and the American Arbitration Association, lined up to move at once. This proved to be much more difficult than anticipated.

Three of the five U.S. ISPs participating in the copyright alerts plan have revealed what mitigation measures they will take after the fourth warning.

AT&T will block users’ access to some of the most frequently websites on the Internet, until they complete a copyright course. Verizon will slow down the connection speeds of repeated pirates, and Time Warner Cable will temporarily interrupt people’s ability to browse the Internet.

It’s expected that the two remaining providers, Cablevison and Comcast, will take similar measures. None of the ISPs will permanently disconnect repeat infringers as part of the plan.