The Copyright Alert System’s main goal is to educate the public. People are informed that their connections are being used to share copyrighted material without permission, and told where they can find legal alternatives.

These alerts start out friendly in tone, but repeat infringers face a temporary disconnection from the Internet or other mitigation measures.

According to a report released today by the Center for Copyright Information (CCI which oversees the program, the Copyright Alert System has had a significant effect. For the first time the group has published actual numbers, covering the first ten months of the program ending December last year.

As can be seen in the table below, 722,820 account holders received a first strike or copyright alert. Of this group, nearly 30% were caught again, generating a second alert. A total of 60,477 subscribers were particularly persistent and reached the mitigation phase after their fifth alert, which is 8% of everyone who received at least one warning.

Around 1.3 million notices were sent out during the first 10 months, a number that will double in the coming year according to the report. 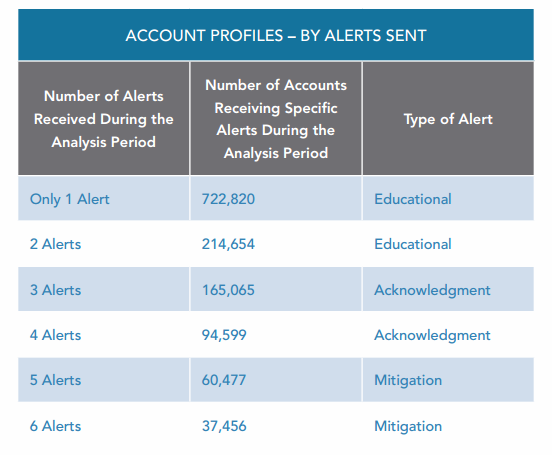 It is relatively hard to interpret these numbers, but the repeat warning percentage of 30% is quite high, especially when one takes into account that people who received their first alert during the last month had little time to generate a second one. In addition, the detection rate is relatively low, not to mention subscribers’ use of anonymizing tools.

It appears that U.S. pirates are relatively persistent. In France, for example, only 9% of all the warned copyright infringers received two warnings, and that was after two full years. Also, only 0.029% of the French got a third strike.

While these “strikes” programs have their differences, the high number of second warnings in the U.S. stands out. One of the issues that may play a role here is that some people don’t read the emails that come in at their ISP address.

The CCI is nonetheless convinced that copyright alerts are able to deter pirates, some at least.

“We are encouraged by the initial data from the Copyright Alert System’s first 10 months suggesting that the program has the potential to move the needle in deterring copyright infringement,” CCI’s Jill Lesser said commenting on the results.

“Our initial research into consumer attitudes – along with what we have seen in our own data – shows that consumers do respond to this kind of educational system that alerts them to infringing activity on their account and helps them find the content they want easily and legally,” Lesser adds. 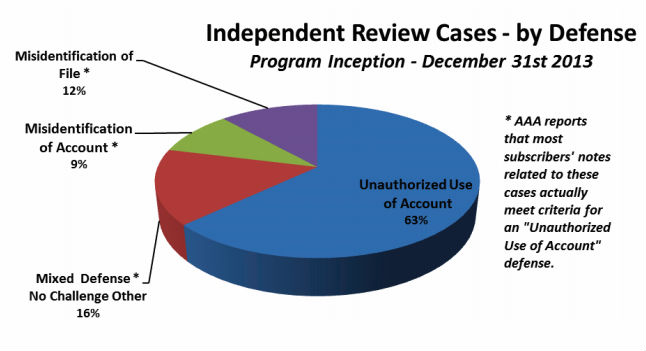 Another figure of interest is the number of appeals. After three or four alerts subscribers have the option to appeal the evidence at the American Arbitration Association. Only 0.27% of the eligible subscribers did so, which translates into a few hundred people.

The most often cited reason to appeal was “unauthorized use” of the subscriber’s account. According to the report there were just 47 successful challenges decided in favor of the accused subscriber, which is 18% of all appeals.

Overall, the participating ISPs and copyright holders are all positive about the results so far. According to the RIAA’s Steve Marks the program is a respectful and effective way to deal with the piracy problem.

“We are proud of the program’s accomplishments and delighted by our successful partnership with the ISP community. This report confirms that the CAS is working – it’s reliable, respectful of consumers, and an effective way to let them know about all the legitimate alternatives in the marketplace,” Marks says.

Despite the enthusiasm, whether the program has been effective enough to put a real dent in local piracy rates has yet to be seen.

Last year we reported that instead of kicking their download habit, many people took measures to prevent themselves from being monitored. In addition, we observed that U.S. traffic to The Pirate Bay did not decline after the system was implemented.

In any case, it’s good to see that the first set of data is now available to the public. It will be interesting to see how the current trends develop over time.