Copyright holders have made serious work of website blocking in Germany.

A few months ago a voluntary agreement was announced with the country’s largest ISPs, which agreed to block pirate sites after a verification process.

This is a major win for rightsholders, but one that can be easily defeated. The Internet providers use relatively simple DNS blockades which can be circumvented by switching to third-party DNS resolvers such as Google, Cloudflare or Quad9, which are all free to use. However, that loophole may not last forever.

Last week Sony Music obtained an injunction at the District Court of Hamburg which requires the Swiss DNS-resolver Quad9 to block access to a site that’s frequently used to host pirated music. While the site remains unnamed, the consequences could be far-reaching.

The Hamburg court found that the DNS service is not eligible for the liability protections that other third-party intermediaries such as ISPs and domain registrars typically enjoy. And if Quad9 fails to comply with the injunction, it will have to pay a fine of 250,000 euros per ‘infringing’ DNS query plus potentially two years in prison.

One of the arguments that Sony brought up in court was that Quad9 already blocks various problematic sites voluntarily. In fact, the DNS-resolver promotes threat blocking as a feature.

“Quad9 blocks against known malicious domains, preventing your computers and IoT devices from connecting to malware or phishing sites,” the company’s website reads. 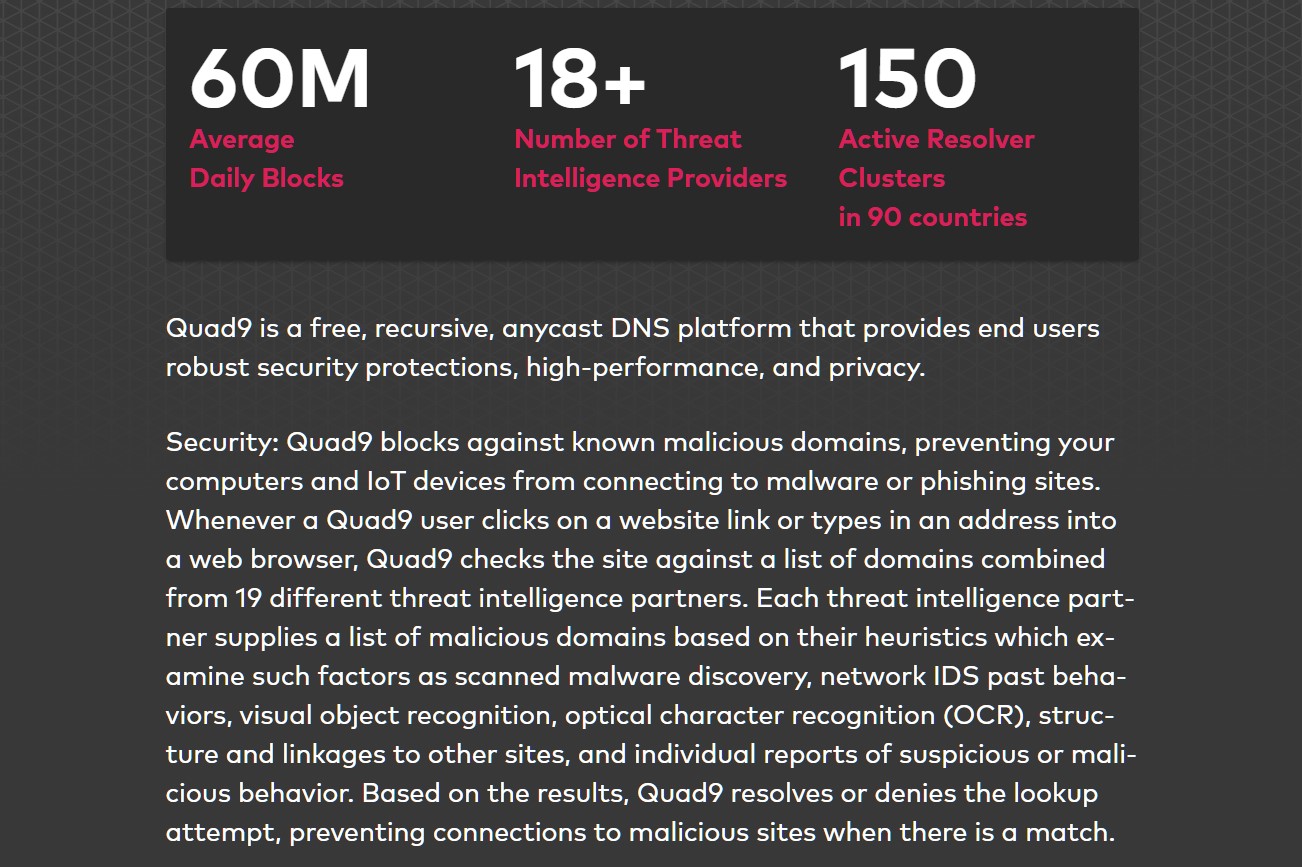 Bill Woodcock, chairman of the Quad9 foundation, doesn’t believe that the company’s malware and phishing filters, which help to protect users, are on par with blocking a pirate site. He informed the German news site Heise that Quad9 will appeal to the injunction.

Speaking with TorrentFreak, Quad9’s General Manager, John Todd, says that the company is still reviewing the order, which it received last Friday. The non-profit foundation doesn’t believe its resources should be used to benefit for-profit companies such as Sony.

“Our donors support us to protect the public from cyber-threats, not to further enrich Sony,” Todd informs us.

One of Quad9’s missions is to protect the public from malware and phishing threats. In the past, copyright holders have repeatedly warned that pirate sites are malware threats. However, Quad9 relies on qualified experts to determine what threats to block, not on copyright holders that clearly have other interests as well.

“Quad9 derives its threat intelligence from qualified experts on malware and phishing, not from the claims of parties without relevant expertise. We would be unable to maintain our 98% success rate in blocking cyber-threats if we accepted input based on self-interested claims, rather than on forensics and expert analysis,” Todd notes.

The injunction is also criticized by Thomas Rickert, a lawyer at the German internet association ‘eco’. “I cannot imagine a provider who is further removed from responsibility for any illegal domains than a public resolver operator,” he told Heise.

This is not the first blocking order against a third-party online intermediary in Germany. Last year, Universal Music obtained a similar injunction against Cloudflare, which also operates a DNS resolver.

The Cloudflare injunction is different because it applied to the pirate music site DDL-Music, which was a Cloudflare customer. DDL-Music could also be the target in the recent injunction, but Quad9 said that this isn’t the case.

As highlighted earlier, if this injunction stands it will be a powerful tool to complement the voluntary ISP blockades. At the moment that blocklist only includes three sites. Of those three, canna.to is the only one that offers access to pirated music, so that would be our bet.

Quad9 didn’t confirm or deny that canna.to is the target of the injunction but the foundation plans to release more information in the near future.

Update: The article was updated to add a response from John Todd, Quad9’s General Manager. We also removed a sentence and added some extra information.

Update: The Cloudflare injunction also applies to the DNS resolver, so we removed a line that incorrectly stated the opposite.