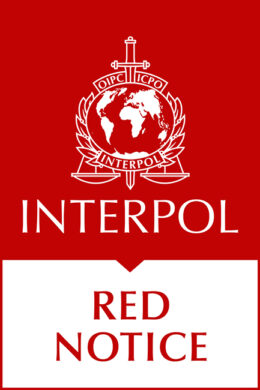 For the very first time in a copyright infringement case, South Korea’s Ministry of Culture, Sports and Tourism in conjunction with the National Police Agency has requested a so-called Interpol Red Notice.

Red Notices detail people who are wanted internationally for serious crimes, typically murder, rape, child abuse or armed robbery, according to Interpol. However, South Korean authorities state that since serious copyright infringers can be jailed for significant periods, those with an arrest warrant filed against them can now be pursued internationally.

“Previously, it was not possible to investigate copyright infringers residing abroad, so the investigation would have to be temporarily suspended and only the information notified to immigration,” the Ministry says.

“But now, with a long period of two years in prison or in jail, a copyright infringer with an arrest warrant has been redeemed with the cooperation of the International Criminal Police Agency (Interpol) to arrest the wanted person and lead him to the country.”

The name of the suspect hasn’t been released publicly but the Ministry of Culture states that they want their Interpol partners to apprehend the operator of a torrent site (simply referred to as ‘torrent—‘) that offered around 455,000 titles illegally and generated around 15 million visits per month. The only other detail is that the person is Australian and residing overseas.

In its announcement, the Ministry of Culture revealed recent progress in its battle against large scale copyright infringers who allegedly distribute copyright works using overseas servers. After closing 25 sites in 2018, police say they arrested nine site operators in 2019, arrested a further six, and closed 20 illicit platforms.

Those arrested include three detained for distributing 5,000 comic works and 20,000 pornography titles on sites utilizing overseas servers, plus two who “earned advertising revenues” by posting 100,000 comic works on foreign sites.

In parallel, the Korea Communications Commission and the Korea Copyright Protection Office under the Ministry of Arts and Culture have been working closely to improve the country’s site-blocking mechanism. In common with other regions around the world, alternative domains, proxies and mirrors that quickly spring up after domains are blocked have been receiving special attention.

As part of the overall crackdown, the National Police Agency is reportedly investigating gambling sites that place banner advertising on ‘pirate’ platforms while encouraging international cooperation against infringement, including strengthening ties with service providers and copyright authorities, plus Google.