Spotify Reminded of uTorrent Past After Branding Grooveshark ‘Pirates’

At this point it’s unlikely that readers will be unaware that Taylor Swift has removed her music from Spotify, complaining that the service fails to “fairly compensate” artists, writers and producers.

“We were both young when we first saw you, but now there’s more than 40 million of us who want you to stay, stay, stay,” Spotify said in a response. “It’s a love story, baby. Just say yes.”

Swift did not, despite claims from Spotify CEO Daniel Ek that the artist was on track to pull in $6 million from Spotify this year if she’d left her content online. Presumably she’ll still get few million dollars from the streaming service, but in a statement yesterday Ek said that reduced availability for fans will mean more turn to illegal services such as the world most notorious torrent site.

“And sure enough, if you looked at the top spot on The Pirate Bay last week, there was 1989,” he said.

While that revelation wasn’t too much of a surprise, nor the highlighting of YouTube as a potential magnet for fans who don’t want to pay, the decision by Ek to flag up a competitor as a pirate holdout has poured yet more fuel onto the Swift fire.

“[Swift’s] songs are all over services and sites like YouTube and Soundcloud, where people can listen all they want for free,” said Ek. “To say nothing of the fans who will just turn back to pirate services like Grooveshark.”

The gibe drew an instant rebuttal from James A. Pearson, EVP Corporate Communications at Grooveshark.

“We would normally never comment on a competitive service and their dust-up with one of the world’s most popular artists. But as Spotify’s CEO — who it’s worth mentioning is the recent CEO of uTorrent — an app used by over 100M people, which had similar perception issues — called Grooveshark ‘a pirate service’ in his blog response to Taylor Swift today, we had to comment on that element,” Pearson said.

On the history, Pearson is correct. In the early days of uTorrent Ek worked with uTorrent creator Ludvig ‘Ludde’ Strigeus before the pair sold up to BitTorrent Inc. in late 2006 and disappeared into the moonlight to create Spotify. Strigeus is a Spotify developer to this very day.

Of course, mentioning uTorrent in retaliation to “pirate service” remarks doesn’t really help calm things down and only drags other third parties into the controversy. However, when looking at the spat from Ek’s perspective it’s not difficult to see why he’s irritated by Grooveshark.

Search Spotify today for Taylor Swift’s 1989 and the only results returned are for cover versions by former cruise ship musician Robert W. Weber, aka Molotov Cocktail Piano. Search Grooveshark for the same and it’s an entirely different story. 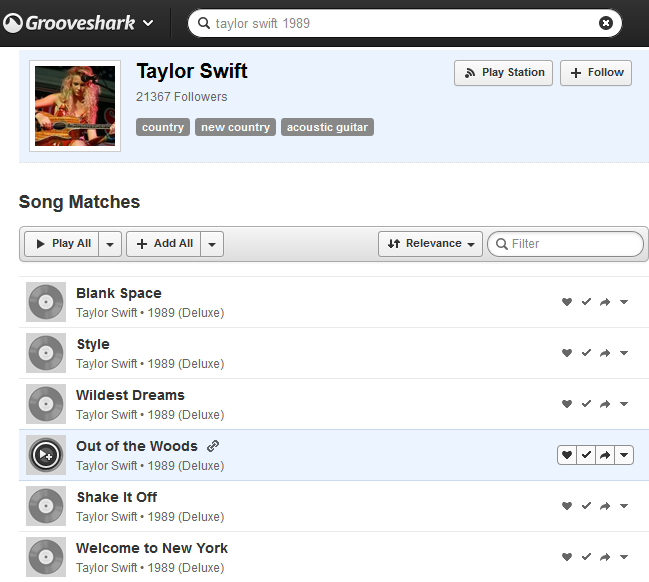 The odd situation here is that while Swift put her own music on Spotify and will get millions back this year as a result, she has now stopped that revenue stream by removing it entirely. On the other hand she didn’t put her music on Grooveshark but it’s there for anyone to stream, until she has someone pull it down with a DMCA complaint of course.

Why the Spotify retraction came before the Grooveshark deletion is anyone’s guess. In a 2013 interview, Grooveshark CEO Sam Tarantino reported that in 2009-2011 his service had 35 million users. Today Spotify has an estimated 50 million so calling the services ‘competitors’ is probably fairly accurate, despite the differences in their business models.

Spotify say they have paid $2 billion to artists while Grooveshark claims that licensing deals in place with thousands of artists has resulted in “million” in payments. However, up to now neither the company nor Swift have mentioned a specific licensing deal for the singer’s music. Until they do, Daniel Ek is unlikely to withdraw his statement.