One of the recurring themes of recent years has been entertainment industry criticism of Google alongside claims the search giant doesn’t do enough to tackle piracy.

In more recent months, the focus has fallen on YouTube in particular, with the music industry painting the video hosting site as a haven for unlicensed tracks. This, the labels say, allows YouTube to undermine competitors and run a ‘DMCA protection racket‘.

While complaints surrounding the so-called “value gap” continue, the labels are now revisiting another problem that has existed for years.

For the unfamiliar, stream ripping is a mechanism for obtaining music from an online source and storing it on a local storage device in MP3 or similar format. Ripping can be achieved by using dedicated software or via various sites designed for the purpose.

With the largest library online, YouTube is the most popular destination for ‘rippers’. Broadly speaking, the site carries two kinds of music – that for which the site has a license and that uploaded without permission by its users. The labels consider the latter as straightforward piracy but the former is also problematic in a stream-ripping environment. Once a track is downloaded by a user from YouTube, labels aren’t getting paid per play anymore.

According to IFPI, the stream-ripping problem has become huge. A new study by Ipsos commissioned by IFPI has found that 49% of Internet users aged 16 to 24 admitted to stream ripping in the six months ending April. That’s a 41% increase over the same period a year earlier.

When considering all age groups the situation eases somewhat, but not by enough to calm IFPI’s nerves. Ipsos found that 30% of all Internet users had engaged in stream ripping this year, that’s 10% up on a year earlier.

In fact, according to comments made to FT (subscription) by IFPI, the problem has become so large that it is now the most popular form of online piracy, surpassing downloading from all of the world’s ‘pirate’ sites.

Precisely why there has been such a large increase isn’t clear, but it’s likely that the simplicity of sites such as YouTube-MP3 has played a big role. The site is huge by any measurement and has been extremely popular for many years. However, this year has seen a dramatic increase in visits, as shown below. 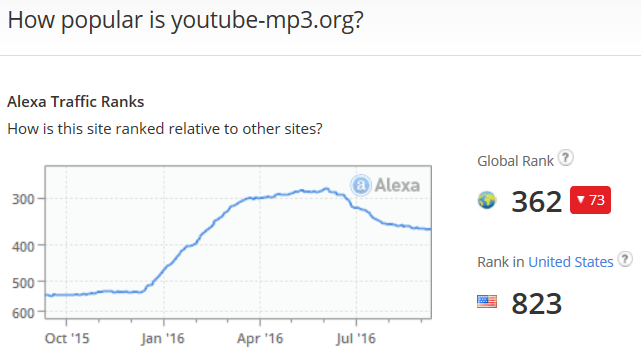 Equally, with pirate site blockades springing up all over the world, users in affected regions will find YouTube and ripping sites much easier to access. Also, rippers tend to work well on mobile phones, giving young people the portability they desire for their music.

But while YouTube and Google will now find themselves under yet more pressure, the company hasn’t been silent on the issue of stream-ripping. On several occasions, YouTube lawyers have made legal threats against such sites, including YouTube-MP3 in 2012 and more recently against TubeNinja.

“We strive to keep YouTube a safe, responsible community, and to encourage respect for the rights of millions of YouTube creators,” an email from YouTube’s legal team to TubeNinja read.

“This requires compliance with the Terms of Service and API Terms of Service. We hope that you will cooperate with us by ceasing to offer TubeNinja with functionality that is designed to allow users to download content from YouTube within seven days of this letter.”

While it is indeed the biggest platform, the problem isn’t only limited to YouTube. Stream rippers are available for most streaming sites including Vimeo, Soundcloud, Bandcamp, Mixcloud, and many dozens of others, with Google itself providing convenient addons for its Chrome browser.

With the major labels now describing stream-ripping as the biggest piracy threat, expect to hear much more on this topic as the year unfolds.