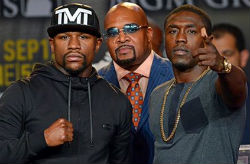 Every single week, hundreds of sites across the Internet receive DMCA-style notices in response to copyrighted content being made available via their domains. Google alone receives more than 10 million.

To tackle potential future infringement it is possible to obtain an injunction and a prime example of that appeared this week when Showtime went to court in the United States to try and prevent a site from broadcasting this weekend’s Mayweather v Berto fight.

While the company hasn’t gone to court, UK-based anti-piracy group KLipCorp is also taking a pre-emptive approach to dealing with expected piracy of Mayweather’s final fight. After being retained by UK pay TV outfit BoxNation, KLipCorp has been writing to sites warning them not to offer the fight illegally.

TorrentFreak was shown a copy of the notice by the operator of streaming links portal StreamSports.me, a site that appeared in the wake of the Wiziwig closure earlier this year.

He told us that while DMCA notices are commonplace, pre-emptive notices such as this are a new experience for him.

“Have you seen something like this? Basically, they say they are watching us, and warn us about listing the event prior to the event itself,” he explains.

KLipCorp says that the letter’s purpose is to “politely remind” sites of their obligations under UK copyright law, the DMCA, and the WIPO Copyright Treaty 1996, and to invite them to assist in the fight against piracy.

“The purpose of this notice is to place you in a position where you have actual knowledge of the intended infringement through your network, infrastructure and/or website and to seek your cooperation to ensure that legal action is only required against those who continue to facilitate infringement,” the notice reads.

“We invite you to co-operate with us in both the monitoring and protection of our Client’s intellectual property in respect of this Event.”

TorrentFreak caught up with KLipCorp founder Peter Lewinton who told us that the purpose of the pre-emptive notice is to make it clear that distribution or linking to streams of the fight is not approved by BoxNation.

“We are not trying to be heavy handed but simply want to draw attention to the ownership of the rights and limit piracy levels,” Lewinton explains.

“From our analysis DMCA notices have limited impact against the high audience non-compliant pirate sites in the live sports sector so a different approach is required.”

Another unique aspect of the KLipCorp notices is that they indirectly highlight an apparent ‘weakness’ in EU copyright law.

“We draw your attention to the fact that Box Nation’s intellectual property rights extend without limitation to the graphics, commentary and music associated with the live and recorded broadcast of the Event and in particular to the graphics of the BoxNation logo which appears in the broadcast feed produced by and on behalf of BoxNation,” the notice reads.

In a nutshell, this refers to the fact that following a Court of Justice of the European Union decision in 2011, live sporting events in themselves don’t qualify for copyright protection in the EU. While this essentially means that KLipCorp has no power to protect the video of the fight itself, it can protect IP owned by BoxNation which is transmitted over the top of the fight, such as graphics, audio commentary, music and logos.

“The overall event [may not be protected by copyright] but copyright exists in the items mentioned within the broadcast,” Lewinton told TF.

The big question now is whether the notices will be effective. Another KLipCorp letter recipient told TF on condition of anonymity that they are taking the threats seriously and won’t be allowing the fight to be streamed from their network on Saturday night.

“After being put on notice it raises the temperature for us so we’ll let others stream the fight instead,” we were told.

StreamSports.me, on the other hand, say their response will be somewhat different.

“The notice served one purpose: it informed me that actually there’s a big boxing event upcoming. I do not follow boxing usually, and wouldn’t have known otherwise. So I’d like to thank them for the pre-emptive DMCA warning, as now I will make sure this popular event is properly represented on StreamSports,” the site’s operator said.

Lewinton wouldn’t say exactly how many sites and services had received the letter but he indicated that it isn’t a large number.

“This is not intended to be a threat – just to draw attention to the possibility that in the final analysis [legal action] may be unavoidable,” Lewinton concludes.