Back in June, Paramount Pictures were setting their lawyers on Todd Blatt, a mechanical engineer from Baltimore.

Blatt had used his design skills and 3D printing company ShapeWays to come up with replicas of the strange cube-shaped objects seen in the Steven Spielberg movie, Super 8.

While that confrontation appeared to end fairly bloodlessly, a new copyright controversy surrounding the movie may not.

Poor-quality cammed copies of Super 8 started turning up online as soon as the movie premiered, but during the last 24 hours the game has gotten a whole lot more interesting. Several P2P release groups have uploaded the movie in high-quality, each one apparently sourced from the same studio-issued DVD Screener.

As can be seen from the screenshot below, the copy has the usual watermarks across the bottom of the screen stating that the movie is the property of Paramount Pictures. However, in the top right hand corner is another watermark which appears to indicate who the copy was given to – H STERN. 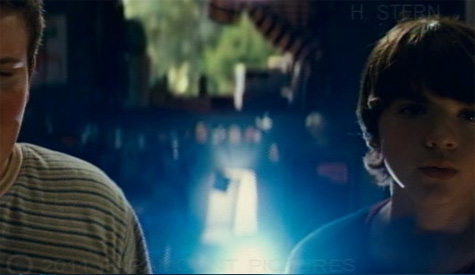 The watermark runs throughout the entire copy and although it’s possible that someone is trying to have some fun at Mr Stern’s expense by putting it there, it seems unlikely that a release group would do such a thing.

Furthermore, if that was the case and a clean ‘unpranked’ copy was available, it would turn up very quickly indeed. At the moment it seems that all release groups are using the same source.

A few hours ago Stern stylist Ralph Cirella denied having anything to do with the leak.

The other possibility of course is that there is another H STERN on the DVD Screener list. Likely? We’ll probably find out on Monday.