As the world is introduced to new technology, things that were previously thought impossible become an everyday occurrence. Telling someone a few hundred years ago that you could deliver a letter to someone on the other side of the world in under a second would result in a rather warm encounter with a stake, yet now with the advent of email its a rather boring event.

Similarly, the developing movie and music industries could not have envisioned their hefty inflammable film reels and cumbersome wax phonograph cylinders being subjected to the same treatment. Times and capabilities change, and with that come new challenges for existing business models.

While the movie industry frets over modern-day illicit digital access to its movies, another relatively small but important front has just opened – the unauthorized amateur creation of related merchandising. These items aren’t being mass-produced by sweat-shops in the Far East, but by creative individuals utilizing the latest in cutting-edge replication equipment – 3D printers.

One such individual, Todd Blatt, a mechanical engineer from Baltimore, offers some rather interesting items featured in the movie Inception, such as the spinning top used by lead character Cobb to test reality.

Blatt makes digital models of the items he sees in movies and sends them off to 3D printing site Shapeways. They recreate the items in a range of materials from plastic to metal and offer them for sale online.

But while the Inception items appear to have flown under the radar, a model Blatt made of another movie prop grabbed the attention of a rather large movie studio. 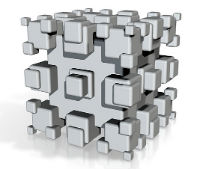 On June 8th Blatt announced on theRPF.com movie prop fansite that he was recreating the distinctive cube-shaped items from the Stephen Spielberg movie ‘Super 8‘. On June 9th he uploaded the files to Shapeways.

By June 10th, Blatt had received unwelcome contact from Hollywood lawyers and all his posts on theRPF were quickly edited out. [Art Andrews, owner of theRPF asked us to point out that Blatt edited his own posts, the site’s operators had no part in that]

“Paramount Pictures’ lawyers sent me a cease and desist letter on Friday for a model I uploaded on Thursday night, and told me to take it down,” Blatt explained.

“It was a replica white funky cube shaped object from their new movie. I complied. I don’t want to sit in a courtroom for the rest of the year. I am no longer offering these for sale, and am complying with Paramount’s demands.”

The object in Super 8 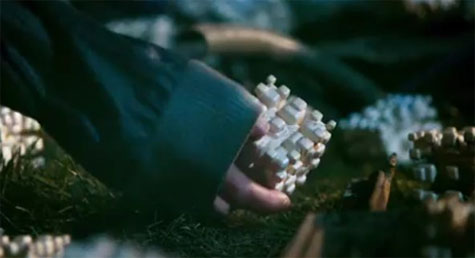 “It’s purely just a fan creation and only one exists, which I ordered for myself before receiving the C&D letter,” Blatt explains. “There is a company called Quantum Mechanix (QMx) which will be selling licensed replicas soon, and if you’re a fan you should order one from them.”

Sending a cease and desist for this kind of item produced in this fashion is certainly unusual, but it raises interesting points. Currently only creative people like Todd Blatt who are skilled at design by trade are easily able to replicate a complex design. Equally, only companies like Shapeways can pull off the hardware side with the required cost-effective ease.

However, just as technology eventually morphed to allow physical film reels and waxy cylinders to be transmitted and reproduced by anyone, in their own homes and with close to zero training, history tells us that we should be prepared for further surprises.

We will all have 3D printers connected to our computers in the not too distant future but when Star Trek-style replicators have already whetted the appetite, man won’t be happy until science-fiction becomes science fact.

Hollywood created the replicator, but will they and other rightsholders be able to kill it? Only stricter copyright laws can provide the solution, or so they would have us believe.