Swedes To Be Wiretapped, Despite Protests

On Wednesday evening the Swedish parliament voted yes to a bill that allows FRA, National Defense Radio Agency, to monitor all phone traffic and e-mail traffic in the name of national security. Unlike the police, FRA can listen in on anyone for any purpose without a court order, bringing the level of personal integrity in Sweden to an all-time-low.

The bill was passed after it was debated in parliament, with 143 votes in favor, 138 opposed and 1 representative abstaining. Before the debate the situation was crystal clear. The four party government alliance would win the vote if all party members voted in favor of the bill, but with the seven seat majority the government currently holds, only four representatives had to vote against the party line in order for the bill to fail.

With all the editorials and statements regarding integrity, copyright and online-rights published during the last months by members of these parties, surely there would be four members of the parties that would follow their convictions rather than the party line? In fact, there were four representatives who have been crystal clear in these kinds of issues: Birgitta Ohlsson (Liberal Party), Karl Sigfrid (Moderate Party), Annie Johansson and Fredrick Federley (both Centre Party). They have profiled themselves on these issues and in some cases even campaigned on them. Surely, Fredrick Federley couldn’t let down his everyone of his voters?

Leading up to Tuesday’s debate, the bill had been heavily criticized by journalists, pirates, lawyers, bloggers, all political parties’ youth organizations – as well as the head of the Swedish intelligence agency SÃ¤po. Rick Falkvinge of The Pirate Party was one of the voices that spoke most strongly against the bill. Also, all of the four daily newspapers’ senior political editors were heavily opposed. Rumours had begun circulating that Karl Sigfrid was indeed going to vote against the bill while Fredrick Federley wrote an ambivalent blog post that indicated where this was heading. 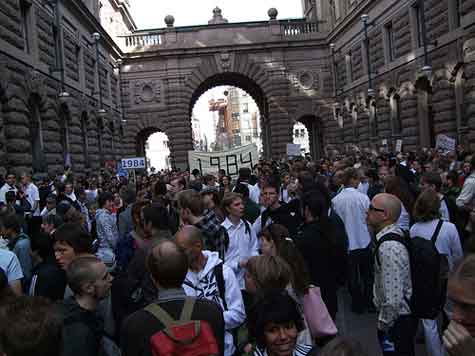 The debate was intense with defense minister Sten Tolgfors of the Moderate Party showing his arrogance, ignorance and lack of understanding time and again (if the bill was not passed, he said, parliament would be risking the lives of Swedish UN troops in Afghanistan).

Towards the end of the debate, Fredrick Federley was on the speakers list. He pulled off a tear-filled act (including sentimentalities about his mother) in which he said he had to follow his conviction but at the same time didn’t want to let his party down. He motioned for the bill to be sent back to parliament’s defense committee for expanding the safeguards of individual rights. This was a carefully orchestrated piece of political theater designed to keep the government alliance together while at the same time allow the Centre Party (which until yesterday held high integrity and online rights) not to lose face. At this time, Federley knew that the bill was being reworked on an initiative from the Liberal Party to a new version that had a new authority controlling the controllers.

The original vote was due to be held on Wednesday morning and following an initiative from The Pirate Party, a crowd of hundreds was gathered in front of parliament to protest the bill and try to convince representatives to vote against it. The crowd was a mixture of pirates, the journalists’ union, the political parties’ youth organizations and worried citizens. Following the debate on Tuesday, the morning vote only considered if the bill should be sent back for revision and the vote was in favor.

In a farce of democracy, it was announced that the bill was to be revised in record time and a new vote be taken later in the evening. “I think the law needs to be re-written. It is not enough to create a few checks and balances … It is the law itself there is something wrong with,” Anders Eriksson, former Chief of Swedish intelligence agency SÃ¤po, told Swedish radio before the vote.

By now, Fredrick Federley and Annie Johansson of the Centre Party had put themselves in a position where they could show to their voters that they had “improved” the bill while at the same time they could vote for the revised version to the happiness and joy of their party colleagues. So, what about the other possible nay-sayers?

According to the buzz on the blogs, Karl Sigfrid of the Moderate Party had decided to vote against the bill and was taken into a party meeting where 30 representatives from the Moderate Party along with party leader and Swedish Prime Minister Fredrik Reinfeldt were on a speech list, bashing him one after the other until he couldn’t take it anymore.

And the remaining? Birgitta Ohlsson of the Liberal Party was as lame as her Centre Party counterparts: She abstained her vote, according to an interview in Dagens Nyheter “with respect to my liberal consciousness and to my voters but also to my party colleagues”.

When the FRA bill version 1.01 was brought back into the chamber on Wednesday evening, the outcome could only go one way. The Government parties along with PM Fredrik Reinfeldt had decided that this bill should go through and with the internal critics effectively silenced the bill was voted through, plunging Sweden into DDR era lack of privacy. How the bill is compatible with Human Rights (The right to respect privacy, family, home and correspondence) will be decided later in the court of the European Union where a number of opposition representatives will bring it to be tried.

The only liberal voting according to her ideology rather than her party line was Camilla Lindberg of the Liberal Party. In an editorial in today’s Expressen she explains why: “My loyalty is with my voters. And with myself and my conviction. I couldn’t get myself to vote in favour of the bill, regardless of the arguments from my colleagues and the last-minutes improvements. […] If the surveillance poses a threat for integrity and freedom without having a proved positive effect, I can’t support such a bill.”