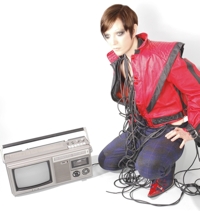 Billie Ray Martin chalked up a few hits in the past two decades, including collaborations with late 80’s dance group S’Express.

Billy Ray has been remixed by some big names including Junior Vasquez, David Morales, BT, Roger Sanchez and Todd Terry. By embracing BitTorrent and giving away two exclusive remixes, she hopes to reach out to a new audience.

“The reason why I chose this path is as a path to generating renewed attention to my stuff,” Billie Ray told TorrentFreak.

“I’ve been keeping up to date with online developments over the years and frankly I find it more fun than chasing indie labels around, waiting for someone to sign you for no money. It’s more fun to put out my own stuff and part of that is making sure people get to hear it.”

The remixes released on Mininova are part of the forthcoming ‘Crackdown Project’ which will kick off officially on the March 6th at the release party in Berlin.

In the past year Billie Ray has been sending out some free music to blogs, through which she received a lot of positive feedback, but this is the first time she has used BitTorrent to distribute her music.

This doesn’t mean that her music wasn’t available on BitTorrent already, of course. When we asked her how she felt about these unauthorized copies that are floating around, Billie Ray said: “It happens, so I can’t grumble really. I make some money from selling that work still so it’s all good. It’s all pocket-money these days.”

Unlike many other artists, Billie Ray doesn’t seem to have much faith in the new (legal) music streaming services that have surfaced in recent years, labeling them as rip-offs.

“Things like Spotify and Last.fm I do not wish to support. They give free unlimited streaming without paying the artists. They say they do, but they don’t,” she said, adding that she made less than $4 from these services so far. “I think they’re killing music off for good.”

She is not the first artist to complain about the revenue generated by Spotify. Lady Gaga has been complaining bitterly as well, although the labels might be to blame for this, since they tend to keep a big chunk of the money.

From her release on BitTorrent she’s not making any more direct money, that’s for sure, but seeing thousands of downloads in a week might cheer her up a little. Being heard, whether it’s through BitTorrent or Spotify, will eventually benefit artists in the long run.