“The Federation” Targets BitTorrent Pirates at the Workplace 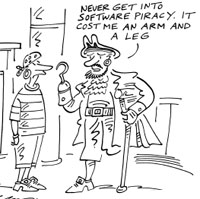 FAST – The Federation Against Software Theft is a UK organization setup in 1984 with the stated aim of ‘promoting the legal use of software by enforcement, lobbying and education’

‘The Federation’, as they like to be called, are currently entering Phase 3 of ‘Operation Tracker’ which aims to trace a “large number of computer users who are breaking copyright law by sharing software on the internet.” They do this using what they call ‘undercover investigators’ – people monitoring P2P networks and gathering data. FAST targets residential addresses but much prefers to catch business connections engaged in file-sharing activities as these are easiest to get a big settlement from. Very often, FAST tries to shift the blame for the file-sharing directly to the company directors, an effective way of increasing the pressure.

Now, FAST says it is monitoring certain sites for the purposes of tracking ‘illegal software downloads’, particularly those that employ ‘swarming technology’ (BitTorrent) in the 3rd phase of Operation Tracker. FAST is using a tracking tool it calls ‘The CCTV of the Internet’ but which is likely just an open source BitTorrent client, with some more advanced logging features tagged on.

Chief Executive of The Federation John Lovelock, said of the system: “The march of technology assists both the law breaker and the investigator.” Indicating a longer-term initiative rather than a blitz he continued: “Operation Tracker Three is not designed to achieve overnight results. Rather it is a long-term surveillance operation aimed at successfully tracing and bringing to book anyone found to be blatantly flouting the law.”

According to FAST, it recently carried out some research with YouGov and was very disappointed to learn that just 2% of the workforce in the UK thought that they could get caught ‘stealing software’. With that in mind, this ‘new phase’ is probably more of a publicity drive for instilling fear into UK businesses who allow their staff to share files than anything else.

As mentioned before, FAST likes to concentrate its efforts on targeting businesses, and those directors that run them, very often claiming that management allow their employees to break the law and therefore must be held ultimately responsible.

“Corporate liability is something that management cannot afford to gloss over – misuse of software is something Directors cannot plead ignorance to” said Lovelock. “If employees are using the corporate network for illegal activity those in charge may be liable. Theft is theft and will be treated accordingly.”

As is customary, Lovelock goes on to confuse physical theft, with copyright infringement: “Our message hasn’t changed,” he said. “Installing software unlawfully is wrong. After all you would not let your employees steal a company car so why are corporates allowing this to continue?”

‘The Federation’ is interesting in that it has mixed non-profit and for-profit operations under the same banner, leaving some people wondering about the direction of the organization. The Federation was a share holder in the for-profit business ‘FAST Limited’ with both sharing offices, staff and a common logo, creating a huge amount of confusion, as indicated by this post, and others like them:

“We had a visit from an officer of Fast who, in a 10-minute Q&A, identified ’16 areas of concern’ with our IT practices. Nearly all were bullshit, with some very minor exceptions. She then suggested that we should join FAST as a corporate member to complete the training, just in case (hint, hint) Trading Standards ever came around to do an audit. What this tells me is that she is obviously a salesperson, working on commission, signing up as many members as possible. This strikes me as a highly unethical way of doing business for what is essentially a regulatory body.”