‘The Office’ Piracy Skyrocketed in the US After Leaving Netflix 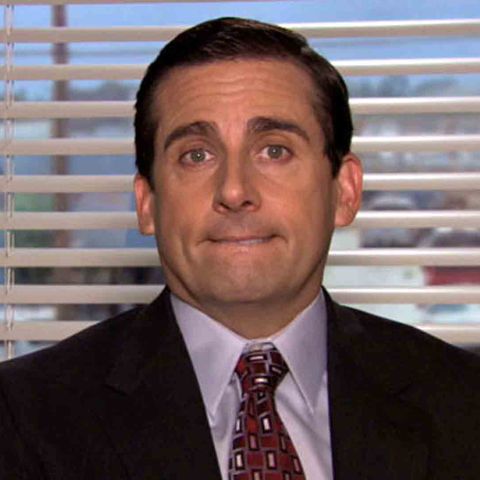 The first episode of the American TV-series The Office premiered more than sixteen years ago.

The show is an adaptation of the British original released a few years earlier and both became a massive success with a dedicated cult following.

Most Streamed TV-Series in the US

This popularity didn’t end when the series stopped. The U.S. version officially ended in 2013 but last year it was still the most-streamed TV-series, with fans consuming more than 57 billion minutes, beating Grey’s Anatomy and The Mandalorian.

The popularity was in part due to the fact that it was widely available. The show was part of Netflix’s content library which most people in the US have access to. However, that changed a few weeks ago.

On January 1st, The Office moved from Netflix to NBCUniversal’s Peacock, which had bought the rights a few years earlier. This was a major disappointment to many fans, especially those who unfortunate enough to have their access cut off mid-season.

The solution to this problem is easy. Fans can simply sign up for Peacock to watch The Office there. However, that would mean paying for another subscription service, which is a bridge too far for many. Instead, some people may have simply turned to pirate alternatives.

To research whether The Office’s departure indeed has a noticeable effect on the piracy numbers we looked at the estimated downloads through torrent sites before and after January 1st, 2021. While this sample of torrent downloads is just a small part of the piracy ecosystem, which is dominated by streaming nowadays, it’s a good proxy for overall piracy traffic.

The graph below shows the daily number of estimated downloads based on data from Iknow. The blue line tracks the number of downloads from the US, which started to spike about the end of the year, as The Office left Netflix. 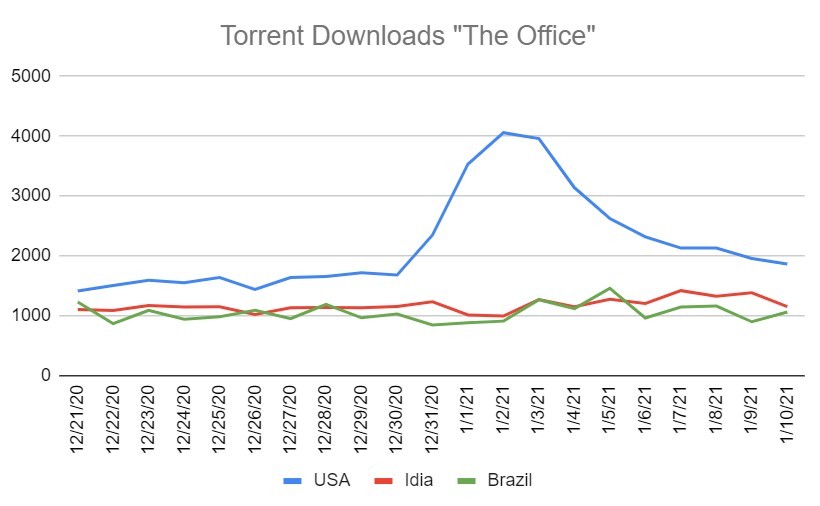 On Saturday, December 26th, there were an estimated 1,439 downloads of the American The Office series, which surged to 4,058 a week later on January 2nd. This increase was exclusive to the US and not visible in India and Brazil, which were second and third in the number of downloads.

Absolute download figures can be deceiving, especially during the Holiday season where we often see piracy rise in general around the world. However, if we look at the relative popularity a similar pattern emerges. 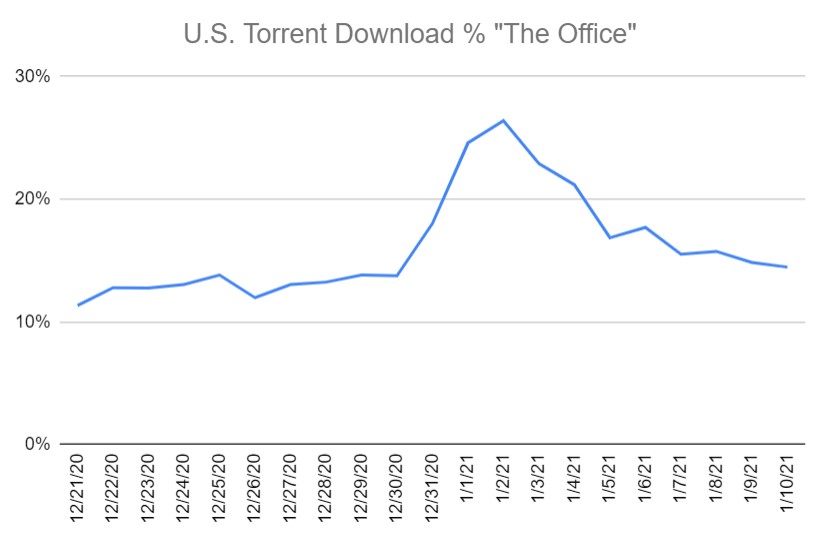 Mid-December, a little over 10% of all The Office downloads came from the United States. This percentage rose to more than 25% in early January and remained relatively high in the days after.

Based on these data it is safe to conclude that the increasingly fragmented streaming landscape directly affects people’s piracy activity. A show such as The Office may be legally available, but not everyone is willing to sign up for yet another subscription.

Whether this will ultimately hurt copyright holders is a different question. Exclusive access and expensive licensing deals could bring in more revenue than the potential lost revenue through unauthorized access. In that case, piracy is little more than collateral damage.