BitTorrent is an excellent distribution mechanism but, for a file to live on, at least one person has to keep sharing it.

This means that most torrents eventually die after the public loses interest. However, some torrents seem to live on forever.

The oldest surviving torrent we can identify is a copy of the Matrix fan film “Fanimatrix.” The torrent was created in September 2003, which means that it will turn 18 this month. A remarkable achievement.

The film was shot by a group of New Zealand friends. With a limited budget of just $800, nearly half of which was spent on a leather jacket, they managed to complete the project in nine days.

While shooting the film was possible with these financial constraints, sharing it with the world was a bigger challenge. At the time there were no free video-sharing services and YouTube had yet to be invented.

No Money For Distribution

Hosting the film on a private server wasn’t an option either. Bandwith was still very expensive, especially in New Zealand. If the project was to be a success, the friends would have to pay many thousands of dollars extra to distribute it.

This is when one of the friends, Sebastian Kai Frost, went looking for other options. Frost had a bit part in the film and also operated as the ‘IT-guy’. After searching for solutions, he eventually stumbled upon a new technology called BitTorrent.

“It looked promising because it scaled such that the more popular the file became, the more the bandwidth load was shared. It seemed like the perfect solution,” Frost told us earlier.

BitTorrent To the Rescue

This was exactly what was needed to get the Fanimatrix published worldwide. So, after Frost got the green light from the rest of the crew he created a torrent on September 28, 2003. To ensure that everything ran smoothly, he also ran his own tracker from a Linux box. 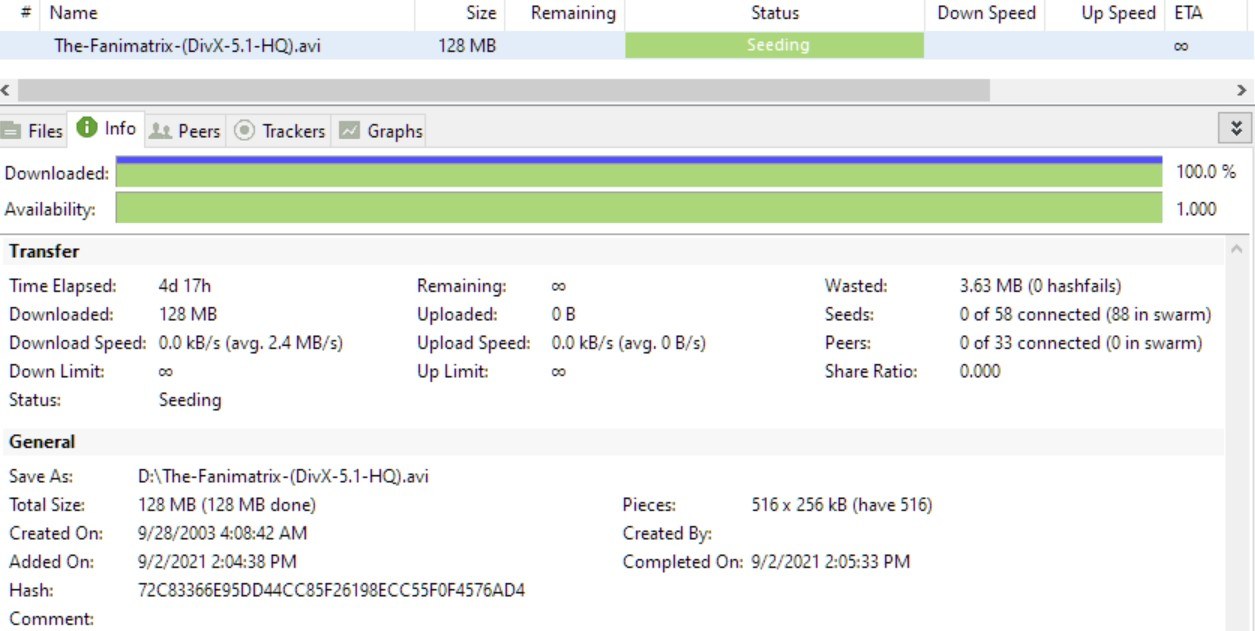 The Fanimatrix turned out to be a great success. In the first week alone, 70,000 people grabbed a copy of the film. This is quite an achievement, especially when considering that BitTorrent wasn’t as widely known or easy to use back then.

With BitTorrent, the film crew easily saved hundreds of thousands of dollars in distribution costs. It was the perfect use case for how the technology could help independent creators.

Today, there are plenty of free ‘instant streaming’ options available that make BitTorrent look silly. However, it is great to see that the Fanimatrix is still being shared after all these years. It’s part of Internet history now.

And with the fourth installment of The Matrix scheduled to premiere later this year, the project may gain some extra traction as well.

TorrentFreak spoke to Frost this week who doubled down on his earlier promise to keep the Fanimatrix site and the torrent running for as long as possible. He’s even taken some precautions, in case of an early departure from this world.

The original Fanimatrix site went offline for a while, but Frost restored it years ago and plans to keep it online for as long as possible. The crew is also considering a special celebration in two years, when the two-decade mark is passed.