Several sports streaming sites had their domain names seized by the Department of Justice and Homeland Security’s ICE unit this week. 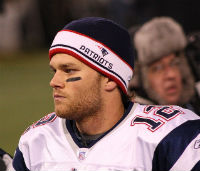 The operation was planned a few days in advance of the Super Bowl to prevent “rogue” sports fans from watching the game through unofficial channels.

Tom Brady, one of the stars playing in today’s Super Bowl, is a good example of such a ruthless thief.

The NFL star admitted that he streamed the game illegally in 2011.

“Last year I was rehabbing my foot in Costa Rica, watching the game on an illegal Super Bowl website. And now I’m actually playing in the game. So, it’s pretty cool,” Brady said.

So is Brady a content thief? Should he be locked up?

If anything, the above shows that instead of complaining about these ‘rogue’ sites the NLF should focus on making the Super Bowl accesible worldwide.

Fans simply want to watch sports, so if they can’t find a legal option….