The release of thousands of US embassy cables and the many more that are expected to come has propelled the whistleblower site Wikileaks to the front page of every respectable news outlet this week. But for the site itself it hasn’t been a smooth ride thus far.

After it suffered a continued DDoS attack on its servers earlier this week the site relocated to Amazon’s cloud hosting service, but just a day or two later it was pulled following complaints from the US government. Today, the hosting troubles continued and Wikileaks was forced to abandon its .org domain.

Due to prolonged DDoS attacks on the Wikileaks domain, nameserver provider EveryDNS decided to pull the plug on the site this morning. “These attacks have, and future attacks would, threaten the stability of the EveryDNS.net infrastructure, which enables access to almost 500,000 other websites,” EveryDNS said.

According to a statement from the company, Wikileaks was properly notified about this issue a day in advance.

“Last night, at approximately 10PM EST, December 1, 2010 a 24 hour termination notification email was sent to the email address associated with the wikileaks.org account. In addition to this email, notices were sent to Wikileaks via Twitter and the chat function available through the wikileaks.org website. Any downtime of the wikileaks.org website has resulted from its failure to use another hosted DNS service provider,” a statement on the EveryDNS website explains.

After being cut off, Wikileaks decided to move from the .org to a .ch domain, which was registered by the Pirate Party Switzerland in June this year. An interesting move, but certainly not the most ideal solution.

The Swiss Pirate Party confirmed that they are now indeed the registrants of the new ‘official’ Wikileaks domain, which had been forwarding to the Wikileaks servers for a few months already. What is problematic, however, is that after being cut off by EveryDNS, Wikileaks has moved its operation to a .ch domain that uses the nameservers of the very same company.

This is not the first time a Pirate Party has helped out Wikileaks. Earlier this year the Swedish Pirates announced a hosting deal with the whistleblower site, to protect the freedom of the press.

“We welcome the help provided by the Pirate Party,” Wikileaks spokesman Julian Assange said at the time. “Our organisations share many values and I am looking forward to future ways we can help each other improve the world.”

For now Wikileaks.ch is up and running but it’s unclear how long it will stay up. The domain Wikileaks.org has not been seized so it is expected that the site will return there once it finds a new nameserver provider. 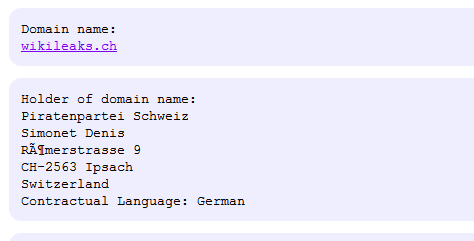