The American science fiction TV-series didn’t make it into our list of the most pirated TV-shows of 2009, but nevertheless each episode is downloaded nearly a million times from all over the world.

The main reasons people have for downloading TV is to catch up with missed episodes, or to watch episodes that are not yet available in their country. While this used to be a relatively geeky habit half a decade ago, today even computer illiterates know how to download a TV-show.

People who make their living in the TV business are not excluded from this group either. Earlier this week, on MSNBC’s Countdown with Keith Olbermann, the Canadian comedy group ‘The Kids In The Hall’ admitted to pirating their own shows via BitTorrent on multiple occasions.

Their reason? They had trouble getting their own episodes over the border legally.

In the Czech Republic a slightly more embarrassing example of BitTorrent use among TV-insiders was uncovered recently. TV Prima, one of the local television stations, was discovered to be hosting two episodes of Fringe on their servers, accessible via a public FTP.

Apparently one of the employees missed two episodes that aired on competing station Nova Cinema. Since TV Nova will only start offering shows via the web starting this fall, there was no other option than to turn to BitTorrent.

Unfortunately the on-demand offering from TV Prima didn’t last long. Shortly after the ‘mistake’ was revealed by a local website the open FTP was closed. 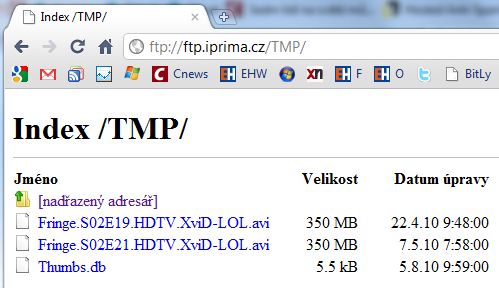