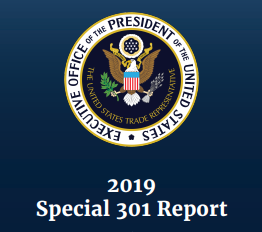 The format remains the same as in previous years and lists three dozen countries that, for different reasons, threaten the intellectual property rights of US companies.

“The identification of the countries and IP-related market access barriers in the Report and of steps necessary to address those barriers are a critical component of the Administration’s aggressive efforts to defend Americans from harmful IP-related trade barriers,” USTR writes.

The topics reported in the yearly overview are much broader than online piracy. They also cover counterfeiting and other IP related issues, including patents and protection of trade secrets. Our coverage is limited to piracy, however, which remains one of the key issues.

The USTR highlights stream-ripping as a significant problem, as well as pirate IPTV services and “illicit streaming devices” in general. The latter are sold throughout the world but are often manufactured in China, which is listed on the USTR’s Priority Watch List.

Camcording piracy, where people record films at movie theaters, remains a significant problem as well. Russia, India, Mexico, and China are called out as frequent sources, but the problem applies to other countries as well.

The USTR notes that countries including Argentina, Brazil, Ecuador, Peru, and Taiwan do not effectively criminalize unauthorized camcording, and hopes that this will soon change.

“The United States urges countries to adopt laws and enforcement practices
designed to prevent unauthorized camcording, such as laws that have been adopted in Canada, Japan, and the Philippines,” the USTR writes.

Most of these observations and comments are not new. They are made year after year in some cases. Apparently, it’s a strategy that has some effect. For example, India recently updated is camcording legislation to allow a three-year prison sentence for those who get caught.

The full list of countries which lack proper IP protection totals 36. Eleven are listed on the most severe Priority Watch List with the rest placed on the regular Watch List.

Canada has been downgraded from the Priority to the regular Watch List this year. The most important step forward taken by Canada, according to the US, is signing the provisions in the U.S.-Mexico-Canada Agreement (USMCA), which will extend the local copyright term to 70-years + life.

However, problems remain as well. Among other things, the US sees Canada’s copyright exception for educational purposes as a grave concern.

“The United States remains deeply troubled by the ambiguous education-related exception added to the copyright law in 2012, which has significantly damaged the market for educational publishers and authors,” the office writes.

Switzerland also remains on the Watch List. While the country generally has strong intellectual property protection, the U.S. remains concerned about its online copyright protection and enforcement, as we’ve highlighted previously. This appears to be the only remaining barrier at this point.

If countries fail to address the issues the USTR has highlighted, the U.S. says it will take appropriate actions in response. No concrete measures are mentioned, but they can include enforcement actions under Section 301 of the Trade Act or pursuant to World Trade Organization rules, for example.