This is what now 22-year-old Trevon Franklin from Fresno, California, did early 2016. Just a week after the first installment of the box-office hit premiered in theaters, he shared a pirated copy of the movie on the social network.

To be clear, Franklin wasn’t the person who originally made the copy available. He simply downloaded it from the file-sharing site Putlocker.is and then proceeded to upload it to his Facebook account, using the screen name ‘Tre-Von M. King.’

This post went viral with more than six million viewers ‘tuning in.’ While many people dream of this kind of attention, in this case, it meant that copyright holder Twentieth Century Fox and the feds were alerted.

The FBI launched a full-fledged investigation which eventually led to an indictment and the arrest of Franklin last summer.

Earlier this year, Franklin signed a plea agreement with the Government where he admitted to sharing the pirated film on Facebook. In return, the authorities recommended a sentence reduction.

This week the Government submitted its sentencing recommendation. Franklin pleaded guilty to a Class A misdemeanor which carries a maximum prison term of a year. While the Government doesn’t go that far, it believes a significant sentence is required.

“[T]he government recommends the high-end sentence of six months’ imprisonment, to be followed by a one-year term of supervised release, and a mandatory special assessment of $100,” the sentencing position reads.

The Government argues that a prison sentence is warranted given the “brazen and public” manner in which Franklin broke the law and “appeared not to care” that this would affect the makers of the movie.

This is also illustrated in dozens of pages of Facebook comments which were presented as evidence. Among other things, these show that many Facebook users warned Franklin that uploading a pirated copy of Deadpool was a crime.

A few of the comments 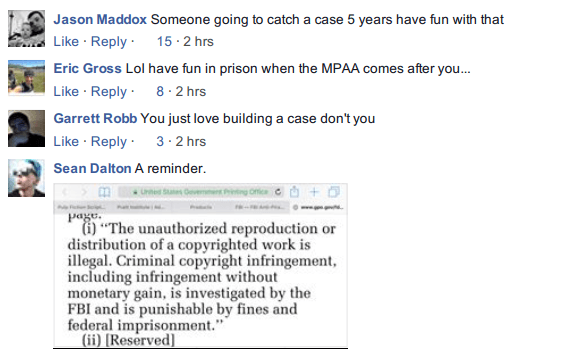 Instead of taking these comments as a warning, Franklin found them irritating. “If it’s a crime, why my shit ain’t got reported??? That part, Just stfu already,” he responded to one user.

In addition, he also went on to create a new Facebook group titled “Bootleg Movies,” indicating that more movies would be shared in the future.

“Defendant even created a Facebook group for the purpose of illegally sharing movies with others, posting ‘EVERYBODY JOIN’ in relation to the Facebook group he created called ‘BOOTLEG MOVIES’,” the Government writes, pointing out the screenshot below.

All in all, the Government argues that a six-month prison sentence is needed to send a strong message to Facebook users and the public at large, to show that there are real consequences for such a crime.

The defense, for its part, points out that Franklin has endured many personal problems in the past.

He has no criminal record but regrets the mistakes that were made and hopes to turn things around. As such, his attorney believes that a sentence of one year probation is sufficient.

“Such a sentence would be sufficient, but not greater than necessary, in light of Mr. Franklin’s tumultuous personal history, remorse for the offense, and his continued desire to redirect his life,” the defense attorney writes.

The matter is now with the court which will decide what sentence is appropriate in this case.