According to that complaint, DataCamp failed to terminate the accounts of these providers after being sent several warnings. As a result, the company was accused of contributory and vicarious copyright infringement alongside calls for an injunction.

Filed in an Illinois district court Friday, the lawsuit sees US broadcaster DISH Network taking on UK-based DataCamp on foreign soil. DISH explains that IPTV services often depend on Content Delivery Networks (CDNs) to deliver their product to the end-user.

According to DISH, DataCamp operates a CDN for this purpose, one that is utilized by at least 11 providers that have illegally distributed DISH content. These include Banjo TV, Bollywood IPTV, Comstar TV, Express IPTV, Gennie TV, Gold TV, IPGuys, Istar, Red IPTV, Sky IPTV, and Zumm TV.

Setting the stage against DataCamp, DISH’s lawsuit draws attention to a 2018 submission to the USTR which saw the Motion Picture Association (MPA) complain that DataCamp’s infrastructure was being used by pirate IPTV services to distribute copyrighted content.

In common with the earlier lawsuit filed by the movie companies, DISH further alleges that despite receiving “hundreds of notices” requesting removal of content under the DMCA, DataCamp failed to respond in an appropriate manner. Furthermore, it’s alleged that DataCamp was sent copies of lawsuits and judgments relating to pirate IPTV services but the company’s responses were completely lacking.

DataCamp Ltd is a tech company based in the UK operating under robust local laws that limit the liability of hosting companies when it comes to the actions of third parties. The system is not dissimilar to that in the United States. However, case law in the United States is undoubtedly richer and the possibility of high statutory damages awards are absent from the UK.

Whether these factors encouraged DISH to sue DataCamp in the US is unknown but according to the broadcaster, a local lawsuit is appropriate. DataCamp operates some of its ‘CDN77’ servers in Illinois, has websites that are visible there, while end-users of pirate IPTV services are also located in the district.

According to the complaint, the named pirate IPTV services utilize DataCamp’s CDN to transmit their illegal services. It alleges that DataCamp markets its CDN as specializing in “live stream processing” while assisting customers with IPTV/OTT delivery.

“Send us your live stream over standard protocols…and let us convert and transcode your video…to optimize viewer experience,” its marketing alleged read.

In addition, DISH claims that DataCamp provides additional products that enable the pirate IPTV providers to offer services such as a DVR and time-shifting. In summary, the broadcaster claims that without CDN77, their ability to offer a top-tier service would be limited.

Complaints against Cloudflare are well documented, including those that allege that the CDN company hides the identities of pirates. Here, DISH says that DataCamp acts in a similar fashion and that by hiding the true location of pirate services, CDN77 hinders their investigations.

Furthermore, the broadcaster says that DataCamp did not remove or disable content when the company sent DMCA notices. Interestingly, it also criticizes the company for not giving its customers (in this case pirate IPTV services) the ability to send DMCA counter notices to DISH. Had it done so, DISH would’ve been able to identify the operators of those services.

“Datacamp did not remove or disable access to the content identified in the Infringement Notices – nor did it require its customers to submit DMCA-compliant counter notices, which would have identified the operators of the Pirate Services to DISH,” the company writes.

The complaint alleges that since October 2017, DataCamp has “deliberately refused” to take reasonable steps to prevent the pirate IPTV providers from using its services. As the image below shows, DISH sent hundreds of complaints over a period of almost four years. 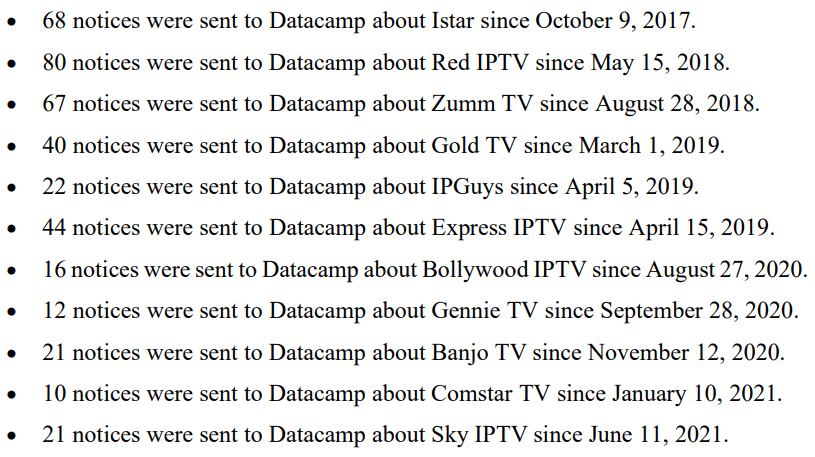 DISH said it provided detailed information about infringements but accuses DataCamp of doing little by way of preventative action.

“Datacamp failed to remove or block the Protected Channels or the Works from being transmitted through its servers and failed to terminate the Pirate Services responsible for the infringement, despite receiving the Infringement Notices and other evidence provided by DISH and Networks,” the lawsuit adds.

DISH says that DataCamp was not powerless to act. It could’ve found out whether the pirate IPTV services were legally authorized to transmit the works before the company transcoded them. It could’ve responded or responded more promptly to complaints. It could’ve been tougher on ‘pirate’ customers who falsely claimed they had done nothing wrong or that the reported infringing behavior had stopped.

Perhaps most importantly, DISH says that DataCamp could’ve implemented a repeat infringer policy that would see an account suspended for receiving one infringement notice and then terminated for receiving more. At the least, it could’ve enforced its own customer service agreement which states that accounts can be terminated for “any reason”.

All of this and more leads DISH to one conclusion – DataCamp is liable for its customers’ actions.

Referencing the DMCA and the ‘safe harbor’ that limits service providers’ liability, DISH says that DataCamp can claim none under copyright law for the following reasons.

Starting with the fundamentals, DataCamp failed to designate a DMCA agent and/or failed to publish the agent’s details on the DataCamp websites. DataCamp failed to remove or disable content in response to complaints, even when it had “knowledge or awareness” that the content was infringing.

The company also failed to “adopt and reasonably implement” a repeat infringer policy which, according to DISH, means that the company received financial benefit from the pirate IPTV services’ infringements.

“Datacamp decided not to terminate the Pirate Services’ accounts or remove or disable access to the Works because it wanted to maintain the revenue that would come from the accounts,” the complaint adds.

DISH says that since it owns the exclusive rights to its TV shows, these were directly infringed by the pirate IPTV services and DataCamp’s CDN was used to publicly perform them. As a result, DataCamp “materially contributes” to that direct infringement under 17 U.S. Code § 501.

In addition to such contributory infringement, DISH says that DataCamp is liable as a vicarious copyright infringer since it profited from its clients’ infringement despite having the ability to stop them.

Describing DataCamp’s actions as “willful, malicious, intentional, purposeful”, the broadcaster is demanding a permanent injunction against the CDN company that would require it to disconnect the pirate IPTV services and implement a robust repeat infringer policy.