In recent years entertainment companies have been placing increasing pressure on search engines that link to sites that facilitate copyright infringement. In August that lobbying appeared to start paying off.

Google announced that it would begin taking into consideration the number of DMCA takedown notices it receives against domains when it determines how high to place them in search results.

Within a week the first signs of the new policy appeared to be visible. Tests carried out by TorrentFreak for the popular movie The Dictator yielded results that no longer included sites such as The Pirate Bay, KickassTorrents and isoHunt. (before and after images).

But now, three months later, the entertainment companies still aren’t happy. According to The Guardian the UK government will review Google’s promise to kick unauthorized media sites down its rankings after it was accused of still not doing enough.

The government threatening to become involved again will be unwelcome news. Last year it issued a private warning to Google that failure to comply could result in legislation that would force the search engine into action.

To see how Google is actually doing today we re-ran our tests on The Dictator, searching for “The Dictator Download” just as we did before. As can be seen from the screenshot below, all the previously disappeared torrent sites are now back including isoHunt, The Pirate Bay and KickassTorrents. 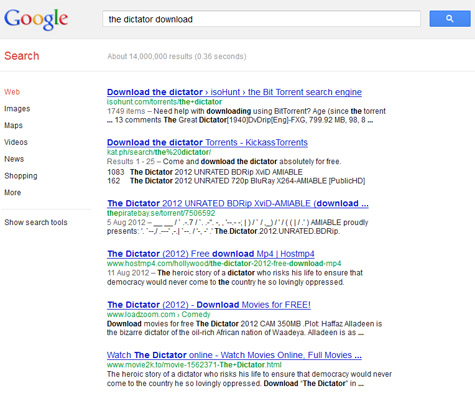 Change the search to “The Dictator Torrent” and every single link on the first page of results links to pages on torrent sites indexing unauthorized copies, a situation that appears completely unchanged from that of three months ago.

Of course, movies are only part of the equation and it appears that when it comes to mainstream rightsholders, music is the content most likely to be targeted with a Google takedown. One of the most targeted domains in this respect is FilesTube, a cyberlocker search engine that hosts zero content of its own.

To see the effect on FilesTube we searched for the top two most popular artists in the US right now according to LastFM – Radiohead and Kanye West.

The first 10 results for Kanye West produced three obviously infringing links, including one from MP3Skull right at the very top. MP3Skull is currently the 23rd most-complained-about domain when it comes to DMCAs sent to Google. A result from KickassTorrents (7th place for DMCAs with Google) was placed two positions above an official iTunes download.

However, in both instances if the search is switched to “Radiohead mp3” and “Kanye West mp3”, all first page results (apart from two for Radiohead) appear to be infringing.

But despite these results, could Google be keeping to its word? When it comes to music searches (at least when they don’t include the words “torrent” or “mp3”) it may well be. The most-complained-about domains seem to appear in the first few results less often than other lower profile ones.

If this is indeed a result of changes by Google, these lesser-known sites will be very grateful for the boost. What this also shows is that demoting certain sites effectively promotes others, shifting piracy around and doing little to stop it.

For its part, Google insists it is doing what it can to push sites with high numbers of removal notices down the rankings. The BPI, a major sender of DMCA takedowns to Google, still aren’t happy.

“Google said it would stop putting the worst pirate sites at the top of search results. Google’s transparency report shows they know clearly which are most infringing domains,” said Geoff Taylor, chief executive of the BPI.

“Yet three months into the much-vaunted algorithm change, many of these illegal sites are still dominating search results for music downloads. We are talking to Google to try to establish why this is the case.”

In the meantime it would be interesting to discover if the amount of time and money invested by the labels into having content taken down is being matched by their efforts to improve their own SEO. If so-called ‘pirate sites’ can make it to the top of the rankings with their comparatively limited resources, why can’t the giants of the music industry do the same – without Google’s help?