Most registrars have denied these suspension requests because they lack any legal basis, but some are cooperating. Yesterday another site fell victim to the police’s campaign after MP3Juices.com had its domain name suspended.

The MP3 search engine was relatively popular with well over a million visitors per month. For now, these visitors will have to find an alternative as the site currently displays a prominent police banner.

“You have tried to access a website that is under criminal investigation by the UK: Police Intellectual Property Crime Unit (PIPCU) This site is being investigated for online copyright infringement,” the banner reads. 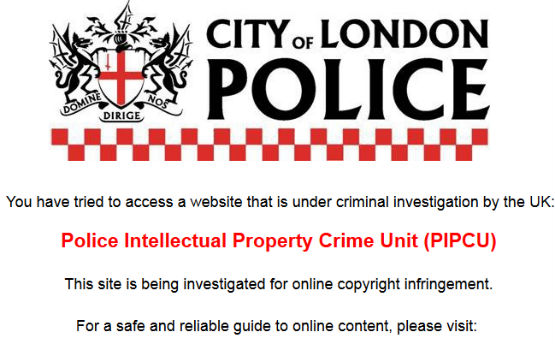 The domain was suspended by domain name registrar Internet.bs, who previously suspended the domains of several other sites including Cricfree.tv. Interestingly, the latter was allowed to transfer its domain to another registrar after it threatened to take legal steps.

TorrentFreak asked PIPCU for a comment on the latest domain suspension but we have yet to hear back. (Update: PIPCU says it has “no comment to make.”)

TorrentFreak spoke with a source who has been following the response of site owners to the recent domain perils, and he suggested that bypassing registrars altogether may become a new trend.

“Cutting out the registrar and going directly to the TLD’s registry is the best way. Through Iceland for example. ISNIC would only respond to a court order in Iceland, not threats from police,” we were told.

Iceland’s ISNIC would indeed be a safe option. The organization previously told us that it will not take any action without a court order, and later condemned PIPCU’s domain suspension requests.