During September a new media availability report hit the United States, shouting loudly about how most popular content is legally accessible online.

Released by research company KPMG and commissioned by NBC Universal, the report was praised by the MPAA and other similarly interested parties. Supporters said that the study provided yet more proof that studios are fulfilling their part of the consumer bargain by making content widely available.

Less than three months on and KPMG has just published the results of a second study into availability of content online. In common with the US-focused September report, ‘UK Availability of Film and TV Titles in the Digital Age’ was also commissioned by NBC Universal.

The study examined UK availability of the most popular film and TV titles across legal digital streaming and download services and according to KPMG, things looked good.

“This report found that the vast majority of the most popular and critically acclaimed film and television content is available from legal digital platforms,” the report begins.

The study found that as of December 2013, almost nine out of 10 of the 756 films reviewed were indeed available from online video services, which does sound like a great start.

These stats are admittedly a fairly impressive read, but the details take off some the shine. Accessing content online should be a relatively painless affair, but UK film fans are going to need quite a lot of patience if they want the broadest possible choice.

In fact, in order to access content at the levels detailed above, users will need to use to more than two dozen services, 27 to be precise.

“As at December 2013, 86% of the 756 unique films reviewed were
available via online video on demand distribution on at least one of the 27 service offerings studied,” the report reads.

When the researchers required that titles must be found on 5 out of 27 services, overall availability drops to 73%, meaning that more than a quarter of popular content is missing, even for consumers with five separate online movie accounts.

In the US version of the KPMG report, notable was the poor availability of content on services such as Netflix. The findings showed that just 16% of the films studied were available through on-demand subscription services (SVOD). The UK does quite a bit better.

“A relatively lower proportion of the most popular and critically acclaimed films were offered under the SVOD model (39%),” KPMG found. 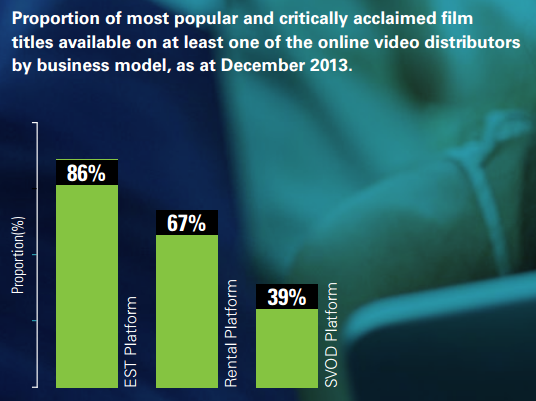 The UK online subscription market has grown quickly over the past couple of years fueled largely by Netflix. Ofcom’s Communications Market Report 2014 revealed that revenue for online subscriptions for audio-visual content reached £111.7m in 2013, up from £63.5m in the previous 12 months.

Moving forward, Netflix’s growth faces similar challenges to that of its US-based service. According to KPMG, six out of 10 times consumers will not find the popular content they are looking for, meaning that additional payments to other services will be required.

The other issues relate to reducing piracy. While having content around 60% of the time is better than nothing, most pirated titles are recent releases that simply aren’t available on Netflix, iTunes, Amazon or other similar services.

And as far as Joe Public signing up to as many as 27 services in order to access most popular content, that isn’t going to happen in a hurry. An almost fully-comprehensive Spotify for movies might be a while off, but bringing one to market would simplify matters no end.

The report can be downloaded here.