The smash-hit track Gangnam Style probably needs little introduction after racking up some mind-boggling stats since its release last year.

At the time of writing the video on YouTube has 1,627,652,006 views and artist Psy has 5,451,160 subscribers to his channel. To call it an Internet sensation might be somewhat of an understatement and it seems almost everyone on the Internet has become involved either by watching, singing or dancing along to the track.

As one types ‘Gangnam Style’ into YouTube the site’s autocomplete suggests possible searches and at number six comes ‘Gangnam Style Parody’. Generally tolerated (at least from a copyright perspective), there have been countless reenactments of Psy’s track uploaded to YouTube from every corner of the globe, but one in particular has incurred the displeasure of music label Universal.

The video features four mayors from Denmark who parodied Gangnam Style in order to draw attention to the challenges faced by entrepreneurs in their region. But the singing and dancing from the unlikely quartet was accompanied by the original track, something which Universal believes they should be compensated for. 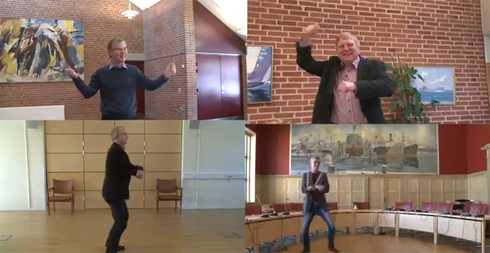 The argument appears to stem from the use of the track. While the mayors believe their contribution to the Psy phenomenon was entirely for parody purposes and therefore fair use, Universal sees things very differently. They insist that the mayors were actually attempting to increase their own profiles and used the video – and Universals copyrights – in order to boost their political careers.

“It is clear that we have in mind that there are local elections in a minute,” said Universal’s Dennis Ploug in a statement.

“We have given them a payment deadline of Friday, but if they do not pay before then it becomes a real action for infringement, and so the amount will be completely different,” Ploug concludes.

A representative from one of the four municipalities issued with a bill from Universal says that any liability lies with the outfit commissioned to produce the video.

“The legal expert we have consulted believes [the demand] is many times higher than what you would pay to use the music in a feature film,” Aagaard says.

“[Universal] want money for four violations, but only one has been committed. They have just seen their chance to win big, and multiply the bill by four.”

The video is now back up on YouTube with Psy’s music removed. Subtitles and random applause have been added to bizarre effect. It’s fair to say that if the video ever had any charm, it’s now been completely destroyed. Add on a $42,000 bill and the disaster is complete.