YouTube is an incredible site with an unbelievable amount of content covering every conceivable topic. But it’s certainly not perfect.

Most complaints relate to the volume of advertising on YouTube, which seems to know when to interrupt a video at the most inappropriate time. Background play isn’t available as standard either, unless users pay for a subscription, which many prefer not to.

These problems and more were solved by an unofficial YouTube project called ‘YouTube Vanced’, or simply ‘Vanced’ for the trademark aware. Since users didn’t need to root their phones or pay out any money, the app developed a considerable audience but in March 2022 and for mostly unspecified legal reasons, Vanced shut itself down.

When ‘ReVanced’ burst onto the scene to pick up the torch, former Vanced users were delighted. Readily accessible on Github and via its own domain, ReVanced wasted no time filling the gap in the market with a widely appreciated end application.

Importantly, it also avoided the legal issues that killed off its predecessor but in the space of just 48 hours this week, ReVanced was hit with not one, but two DMCA notices. A knee-jerk reaction might pluck YouTube out of the air as an obvious sender, but that certainly isn’t the case here.

The first notice dated December 6 was filed by the developer of the Android app ‘AnyTracker‘. The app detects changes on websites and at least officially, is only available on Google Play.

According to the developer, ReVanced’s patch repository contained a patch that enables users to access AnyTracker’s premium functions, but without having to pay.

The complaint alleged breaches of the DMCA’s anti-circumvention provisions but based on the information provided, GitHub could not determine a valid circumvention claim. However, GitHub did find grounds for other copyright claims so processed the notice anyway.

In a DMCA takedown notice dated December 7, German companies Garzotto GmbH and Kachelmann GmbH made similar claims. They own a weather app called “Pflotsh ECMWF” and subscriptions can be purchased via Google Play.

Tools available in the ReVanced repo bypass the need for payment, the companies said.

This notice also alleged infringement due to unauthorized circumvention but GitHub processed the claim based on other copyright infringement(s). GitHub’s responses to both notices also contain the following text:

GitHub responded by removing the repo containing the patches, entirely as expected. The main ReVanced repo was left intact but the removal of the patch repo still represents a setback.

The ReVanced patch repo contained software (patches) that modify YouTube’s official Android app in specific ways. The image below shows just a small sample (another list here) but these are the modifications that define ReVanced’s functionality. 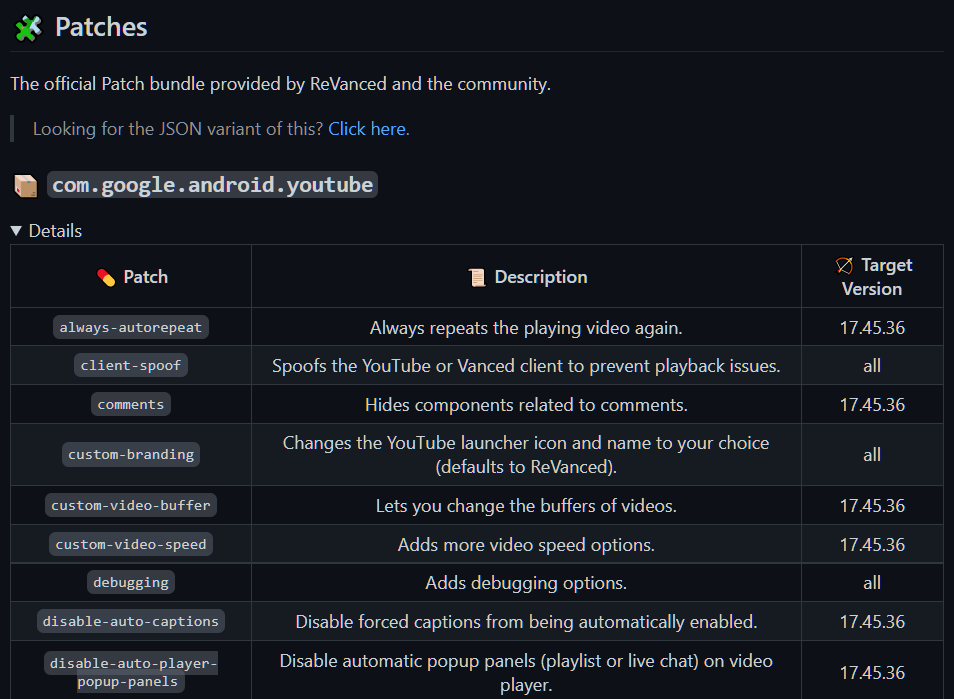 None of this means the end of ReVanced. An announcement by the project explains that GitHub won’t be used for patches in future but the show will go on.

“ReVanced will stop distributing patches on GitHub for the time being until the current situation has been evaluated properly. Everything is subject to revision in the future and we will inform you of any further updates.

“ReVanced is always available at revanced.app,” it concludes.