“The Plan – which incorporates views from a variety of individual stakeholders across government, industry, educational institutions, trade organizations and public interest groups — offers a blueprint for the work to be carried out over the next three years by the Federal Government in support of a healthy and robust intellectual property enforcement policy environment,” a White House statement reads.

The plan has four stated goals:

While shutting down websites is often seen as the ultimate anti-piracy tool, more commonly authorities are targeting what they believe fuels online piracy – money. The report says that while original content is expensive to create, copies cost almost nothing, leading to large profits for pirates.

“An effective enforcement strategy against commercial-scale piracy and counterfeiting therefore, must target and dry up the illicit revenue flow of the actors engaged in commercial piracy online. That requires an examination of the revenue sources for commercial-scale pirates,” the report says.

“The operators of direct illicit download and streaming sites enjoy revenue through membership subscriptions serviced by way of credit card and similar payment-based transactions, as is the case with the sale and purchase of counterfeit goods, while the operators of torrent sites may rely more heavily on advertising revenue as the primary source of income.”

To cut-off this revenue, the government foresees voluntary collaboration between payment processor networks, online advertisers, and the banking sector.

“All legitimate payment processors prohibit the use of their services and platforms for unlawful conduct, including IP-infringing activities. They do so by way of policy and contract through terms of use and other agreements applicable to their users,” the JSP says.

“Yet, notwithstanding these prohibitions, payment processor platforms continue to be exploited by illicit merchants of counterfeit products and infringing content.”

The government says that pirates and counterfeiters use a number of techniques to exploit payment processors and have deployed systems that can thwart “test” transactions conducted by rightsholders and other investigators. Furthermore, the fact that some credit card companies do not have direct contractual relationships with merchants, enables websites to continue doing business after payment processing rights have been terminated.

The JSP calls for more coordination between companies in the ecosystem, increased transparency, greater geographic scope, and bi-lateral engagements with other governments.

The JSP begins with the comment that “Ad revenue is the oxygen that content theft to breathe” and it’s clear that the government wants to asphyxiate pirate sites. It believes that up to 86% of download and streaming platforms rely on advertising for revenue and the sector needs to be cleaned up.

In common with payment processors, the report notes that legitimate ad networks also have policies in place to stop their services appearing on pirate sites. However, “sophisticated entities” dedicated to infringement can exploit loopholes, with some doing so to display “high-risk” ads that include malware, pop-unders and pixel stuffing.

Collaboration is already underway among industry players but the government wants to see more integration and cooperation, to stay ahead of the tactics allegedly employed by sites such as the defunct KickassTorrents, which is highlighted in the report. 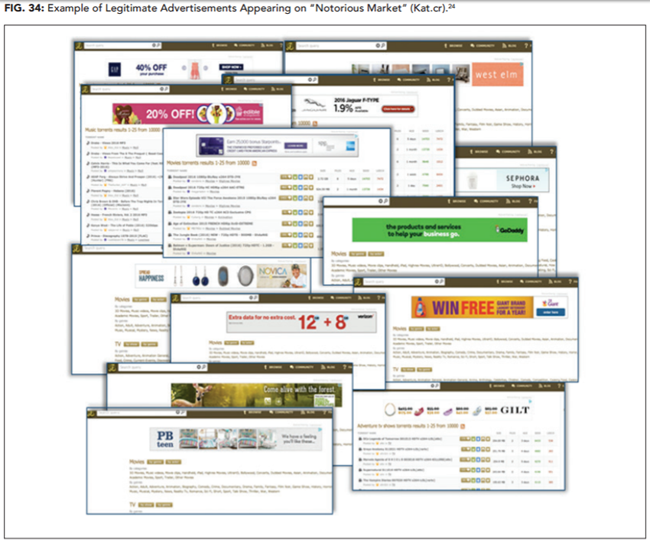 “IPEC and the IPR Center (with its constituent law enforcement partners), along with other relevant Federal agencies, will convene the advertising industry to hear further about their voluntary efforts. The U.S. Interagency Strategic Planning Committees on IP Enforcement will assess opportunities to support efforts to combat the flow of ad revenue to criminals,” the JSP reads.

“As part of best practices and initiatives, advertising networks are encouraged
to make appropriately generalized and anonymized data publicly available to permit study and analysis of illicit activity intercepted on their platforms and networks. Such data will allow study by public and private actors alike to identify patterns of behavior or tactics associated with illicit actors who seek to profit from ad revenue from content theft websites.”

When pirate sites come under pressure from copyright holders, their domain names are often at risk of suspension or even seizure. This triggers a phenomenon known as domain hopping, a tactic most visibly employed by The Pirate Bay when it skipped all around the world with domains registered in several different countries. 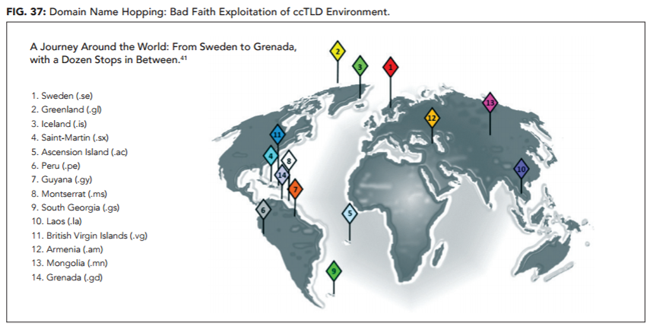 “To evade law enforcement, bad actors will register the same or different domain name with different registrars. They then attempt to evade law enforcement by moving from one registrar to another, thus prolonging the so-called ‘whack-a-mole’ pursuit. The result of this behavior is to drive up costs of time and resources spent on protecting intellectual property right,” the JSP notes.

“The relationship between any given ccTLD administrator and its government will differ from case to case and may depend on complex and sensitive arrangements particular to the local political climate. Different ccTLD policies will reflect different approaches with respect to process for the suspension, transfer, or cancellation of a domain name registration,” it reads.

“Based on the most recent Notorious Markets lists available prior to issuance of this plan, ccTLDs comprise roughly half of all named ‘notorious’ top-level domains. Considering that ccTLDs are outnumbered by gTLDs in the domain name base by more than a 2-to-1 ratio, the frequency of bad faith ccTLD sites appear to be disproportionate in nature and worthy of further research and analysis.”

Once again, the US government calls for more cooperation alongside an investigation to assess the scope of “abusive domain name registration tactics and trend.”

As widely documented, rightsholders are generally very unhappy with the current DMCA regime as they are forced to send millions of notices every week to contain the flow of pirate content. Equally, service providers are also being placed under significant stress due to the processing of those same notices.

In its report, the government acknowledges the problems faced by both sides but indicates that the right discussions are already underway to address the issues.

“The continued development of private sector best practices, led through a multistakeholder process, may ease the burdens involved with the DMCA process for rights holders, Internet intermediaries, and users while decreasing infringing activity,” the report says.

“These best practices may focus on enhanced methods for identifying actionable infringement, preventing abuse of the system, establishing efficient takedown procedures, preventing the reappearance of previously removed infringing content, and providing opportunity for creators to assert their fair use rights.”

In summary, the government champions the Copyright Office’s current evaluation of Section 512 of the DMCA while calling for cooperation between stakeholders.

The Joint Strategic Plan highlights the growing part social media has to play in the dissemination of infringing content, from driving traffic to websites selling illegal products, unlawful exploitation of third-party content, to suspect product reviews. Again, the solution can be found in collaboration, including with the public.

“[The government will] encourage the development of industry standards and best
practices, through a multistakeholder process, to curb abuses of social media channels for illicit purposes, while protecting the rights of users to use those channels for non-infringing and other lawful activities,” it notes.

“One underutilized resource may be the users themselves, who may be in a
position to report suspicious product offerings or other illicit activity, if provided a streamlined opportunity to do so, as some social media companies are beginning to explore.”

The government believes that greater knowledge among the public of where it can obtain content legally will assist in reducing instances of online piracy.

“The U.S. Interagency Strategic Planning Committees on IP Enforcement, and other relevant Federal agencies, as appropriate, will assess opportunities to support public-private collaborative efforts aimed at increasing awareness of legal sources of copyrighted material online and educating users about the harmful impacts of digital piracy,” it concludes.