aPOCALYPSE pRODUCTION cREW (aPC), was thought to be first organized ‘warez‘ group to coordinate the pre-release uploading of mp3s to the Internet. Founded in 1997 by members known as acid^rain and Viper, aPC’s forté was the pre-release of music CDs which they obtained from music industry insiders and magazine workers. The group was raided as part of Operation Fastlink. 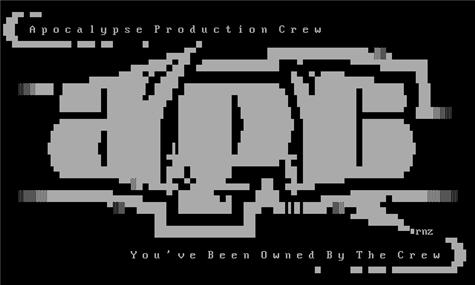 According to evidence presented at his May 2008 trial, Barry E. Gitarts, aka ‘Dextro’, operated and financed a server based in Texas which was used by aPC to store thousands of music files, movies, software and games. The New York resident was convicted of Conspiracy to Commit Criminal Copyright Infringement.

On Friday, Gitarts, aged 25, was sentenced in Alexandria federal court to 18 months in jail for his role in aPC.

Another ex-member of aPC, Jacob Stahler, aka Lunatik, was on the witness list at the May trial, and there has been speculation that he testified against Gitarts. Stahler himself was also convicted of Conspiracy to Commit Copyright Infringement, but was later sentenced to just 2 years probation.

So far there have been a total 15 criminal convictions of aPC members, including that of Mark Shumaker of Florida (aka ‘MarkAlso’), a previous leader of the group who already admitted criminal copyright infringement back in 2003.