One only has to look at Google’s Transparency Report to see how many apparently unauthorized music services exist on the web today. They’re a thorn in the sides of rightsholders and the DMCA notices sent out because of them run into the tens of millions.

Most are relatively thoughtless affairs that pull in music from anywhere it’s available, much of it from Russia – unlicensed and very much illegal. While free to access, the majority of unofficial sites don’t spend much time over user experience. The same cannot be said of a new service just launched out of Spain.

When one first accesses Wefre the site has an immediately familiar feel and it’s clear from the start that Spotify is its inspiration. One also gets the feeling that this service is going to cause disruption so think of this piece as less of a review and more of heads-up of things to come. 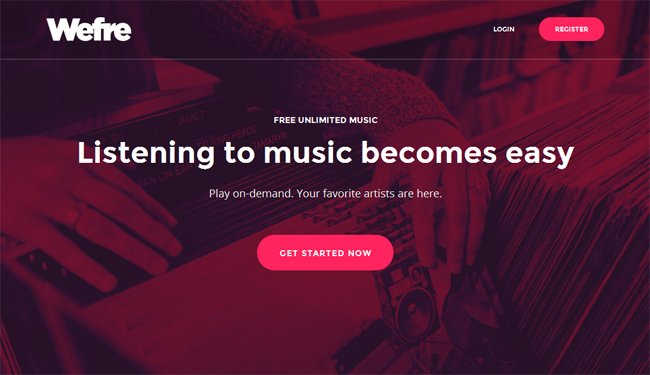 Wefre requires users to open an account but that’s as simple as providing a username and email address which at the time of writing isn’t checked as being valid. Nevertheless, the value of signing up becomes clear when testing Wefre out.

The first thing that becomes evident is the similarity between Wefre’s web-based interface and Spotify’s desktop software. Eschewing the black theme for an off-white affair, Wefre’s layout is extremely clear. For users of Spotify (who of course won’t need the service) it feels like home from home. 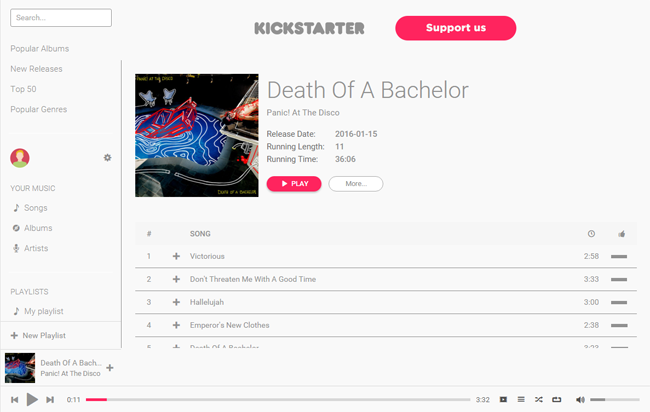 Wefre provides convenient links for popular albums, new releases, top 50 tracks and even popular genres, which unlike other third-party services makes it excellent for music discovery.

Just like with Spotify, skipping around tracks, selecting new albums and finding new content from related artists is a pretty seamless experience. Not only is the service lightning fast (yes, as quick as Spotify) it’s remarkably good to look at too. 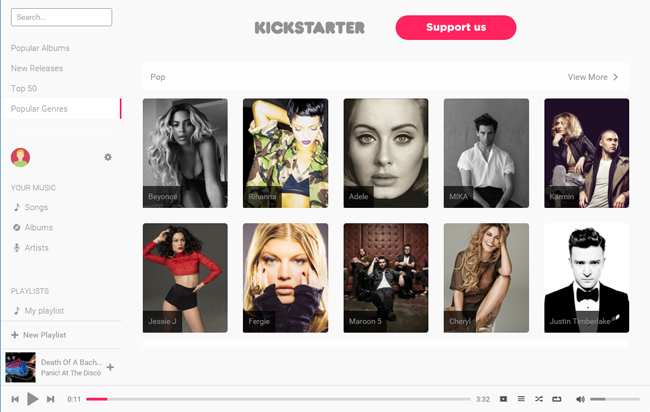 Where many wannabe-Spotify services break down is their lack of support for doing anything creative with individual tracks beyond simply playing them. Wefre does not fall into the same trap. As can be seen in the image below, it offers a similar range of options to Spotify and even allows people to email their friends with links to a track. 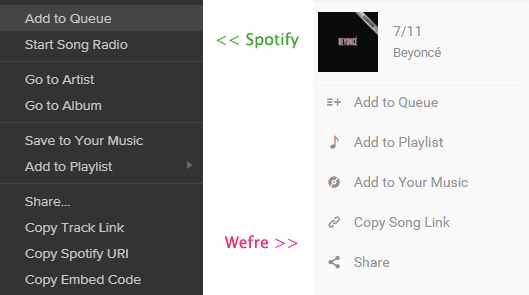 Of course, it hasn’t been long since we first reported on Aurous, the now defunct but similar service that was battered into submission by the RIAA. However, while Aurous was criticized for utilizing pirate music from unauthorized sources in the East, Wefre claims its content is from entirely legal sources.

Behind the scenes Wefre appears to be a clever YouTube / Spotify mashup which utilizes the APIs officially made available by both companies to create its own take on music presentation. According to Felix Ramallo at Infotechnology.com, Wefre pulls music tracks from YouTube while utilizing the musical catalog of Spotify.

Wefre creator Boris Vera, who appears to be based in Tenerife, one of the Spanish Canary Islands, says his service is all above-board.

“We offer legal services and we operate correctly under the terms of use. When you click on a song a YouTube video is actually playing in the background and thanks to the Spotify API for developers we can organize music, so Wefre does not store a single song,” he explains.

While Wefre currently works through a browser, the service has iOS and Android apps under development which are subject to a Kickstarter campaign. “Wefre is a new completely free music streaming service. All the music from your favorite artists on-demand and ad-free,” it reads.

Wefre doesn’t appear to have made the big mistakes Aurous did early on but history tells us that a service that works as well as this one is likely to attract the negative attentions of the labels. Indeed, the fact that Wefre’s music comes from YouTube probably won’t help it either. In the Aurous case, the RIAA said the following about content pulled from YouTube and Soundcloud.

“Plaintiffs have not authorized the streaming or downloading (copying) of their recorded music from websites except pursuant to agreements that control the terms on which such works are made available,” the RIAA said.

“Defendants can only cause such downloads to occur by circumventing the protections such sites have against such downloading and violating the sites’ terms of service that expressly prohibit such conduct.”

Whether the Wefre package as a whole will be enough to prompt the labels into action remains to be seen, but if it looks like Spotify and works like Spotify, it’s likely the labels will feel entitled to a piece of the action. We almost certainly haven’t heard the last of this one.

Update: While the Wefre homepage is up, the site itself appears to have gone down. Whether that’s due to unexpected traffic or other action is unknown.

Additionally, it appears that other sites are now operational with almost identical layout and functionality, which suggests a common package or script operating behind the scenes. With that in mind, Wefre is almost certainly not the unique project it first appeared.

Update 2: Wefre is no longer available for leag reasons.