What Piracy? The Entertainment Industry is BOOMING!

We’ve pointed it out numerous times in the past. Despite the rampant piracy, Hollywood and other entertainment industries continue to break revenue and sales records year after year.

In an excellent report commissioned by the CCIA, Techdirt’s Mike Masnick has has made an excellent overview of how well things go in the various entertainment industry sectors.

The report titled “The Sky is Rising” was presented at the MIDEM music business conference earlier today.

A summary of some of the key findings:

* Data from PricewaterhouseCoopers and iDATE show that from 1998-2010 the value of the worldwide entertainment industry grew from $449 billion to $745 billion.

In addition to statistics, the report also lists many of the case studies that we’ve covered here at TorrentFreak, from Paulo Coelho to Louis CK. 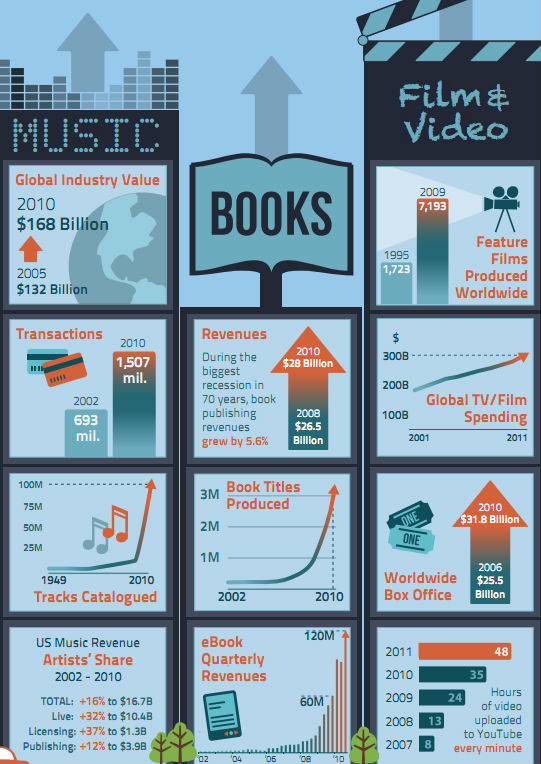 In large part, the report is meant to counter the entertainment industry claims that their businesses have been ruined by piracy, and that the Internet has to be monitored and censored.

“Unfortunately, it feels like much of the debate about copyright law over the past few decades has been based on claims about the state of an industry that simply don’t match up to reality,” the report reads.

“Rather than decrying the state of the entertainment industry today and seeking new laws to protect certain aspects of the industry, we should be celebrating the growth and vitality of this vibrant part of our economy — while consumers enjoy an amazing period of creativity.”

“We hope that this report will help shift the debate away from a focus on a narrow set of interests who have yet to take advantage of the new opportunities, and towards a more positive recognition of the wide-open possibilities presented by new technologies to create, promote, distribute, connect and monetize. We’re living in a truly amazing time for the entertainment industry, and it’s time that our national debate reflects that reality.”