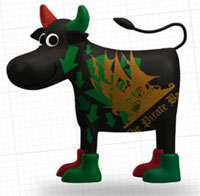 In the past months we’ve seen that the RIAA has won two prominent lawsuits, raking in $1.92 million and $675,000 respectively. At the same time and outside of the spotlights, thousands of file-sharers were contacted in what can only be described as a pirate ‘honey pot.’

Meet Digiprotect, the pirate tracking company that earned its marks tracking down ‘adult’ pirates, but branched out to protecting the works of all sorts of copyright holders. Over the years the company has perfected its pirate tracking tactics to guarantee maximum profits.

Although most companies operating in the same realm try to fly under the radar as much as possible, Digiprotect’s account manager Thomas Hein is more vocal about their business strategies. In an interview he gave a while ago he explains how his company leases copyrights so they can trap potential downloaders.

“We get the legal rights from the companies to distribute these movies to stores, and with these rights we can sue illegal downloaders. Then we take legal action in every country possible, concentrating on the places where such action will be profitable,” Hein says.

So Digiprotect acquires the right to distribute movies, music or games from the rights holders, which they then share on various P2P networks. All they have to do is wait for people to take the bait. If someone tries to download the file they collect the IP-address and initiate legal action through one of their befriended law firms.

That is, if it’s profitable, otherwise Digiprotect can’t afford to protect the copyright holder’s rights, as Hein explains.

“No one working for DigiProtect has a fixed salary. If we make money, everybody makes money. If we don’t, nobody does. This means the lawyers, sales people and customers. It’s all about how much money can be recouped and then sharing it.”

Indeed, it’s all about the money.

“Our success rate is high enough to make good money for everybody,” Hein says, “and it’s also high enough to deter people from stealing content in the future. But we have to be careful about the amount of damages we ask for.”

So how does one go about making ‘good money’? Apparently it’s not only important where you sue people, but also the amount of damages you claim.

“We try to find a figure that covers our costs and pays money to our licensors, which is usually around 500 Euro ($700). Other firms are going for huge amounts of money, and the judges don’t like it. If the judges feel you’re being greedy, they won’t rule in your favor.”

Yes, you’re reading it right. The damage figures are not based on any actual losses, they are carefully calculated to guarantee maximum profits for all parties, except the alleged pirate of course. We can’t help but wonder who the real thieves are here…