The MPAA just closed one of its best years, scoring two major victories in recent months.

In October the anti-piracy group won its case against the BitTorrent search engine isoHunt, resulting in a $110 settlement. Soon after that, the MPAA agreed on a similar deal with file-hosting service Hotfile.

While the MPAA is unlikely to recoup much of this money, Hollywood’s anti-piracy group believes that the millions of dollars that were spent on these cases were worth it. MPAA’s new Senior EVP and Global General Counsel, Steve Fabrizio, led both cases as outside counsel and thinks that without these victories piracy would have been an even bigger problem today.

The MPAA sees the BitTorrent ecosystem as one of the greatest threats for the movie industry. In this regard, shutting down isoHunt was a big win, despite the fact that a third-party copy of the site lives on as one of the most visited torrent sites.

“One of our greatest problem areas is the whole BitTorrent ecosystem. Obviously the IsoHunt case was one of a series of important actions to help create the rules of the road there,” Fabrizio notes.

To illustrate the significance of the isoHunt case, Fabrizio has framed the permanent injunction the Court of Appeals issued last year. This framed verdict is one of the major trophies currently on display at MPAA headquarters. 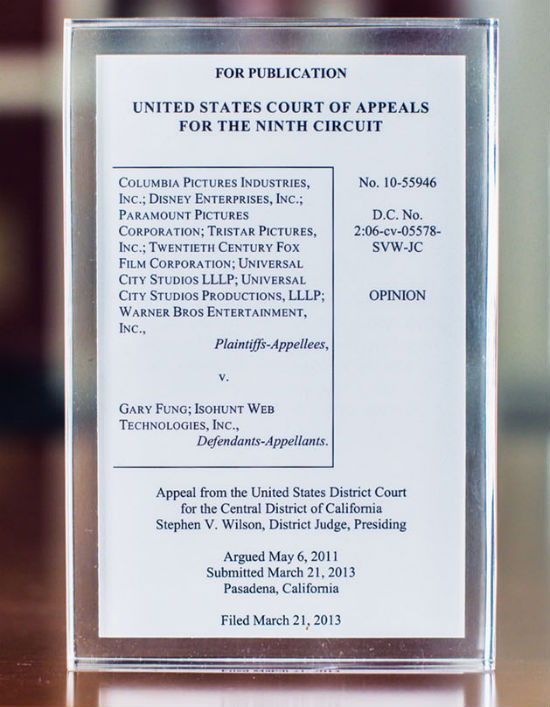 In addition to BitTorrent sites, the MPAA is also concerned with the dozens of file-hosting services through which pirated Hollywood movies are currently being shared. According to Fabrizio these sites are mostly set up to infringe copyrights, and not for users to store files.

“These are not storage vehicles at all, they are distribution hubs, and to call them cyberlockers is a misnomer. They are better referred to as distribution hubs because they exist for the sole purpose of helping third parties gain access to the content,” Fabrizio says.

Interestingly, however, the MPAA doesn’t seem keen on initiating more lawsuits against individual sites. Instead, the group is expressing a preference to deal with these issues through voluntary agreements. The six-strikes system for example, and strict anti-piracy policies in the advertising and payment processor industries.

With regard to Kim Dotcom and Megaupload, the MPAA is considering its options for filing a civil lawsuit. According to Fabrizio, however, it is clear that Dotcom is guilty. He believes that Megaupload’s founder’s role as a martyr for Internet freedom is little more than a clever PR play.

“I’ve been in this game for close to 15 years dealing with the Kim Dotcoms of the world, by whatever name they call themselves. And they all position themselves as a champion of something because it doesn’t sell papers for them to position themselves for what they are — people who just slap together some crude technology to make as much money as quickly as they can before they get caught and then run and hide.”

“So it doesn’t surprise me that Kim Dotcom has set himself up as some champion of something or a martyr, but it doesn’t stick. The facts on the ground don’t support it. The guy does business for the sole purpose of infringing copyrights, and that’s exactly what his business did. And now he just has to face the consequences of that,” Fabrizio adds.

Quite surprisingly, the MPAA is not looking for new copyright legislation, and Fabrizio doesn’t believe in a revival of the much protested SOPA and PIPA bills. Instead, the MPAA will continue to focus on voluntary agreements, as well as building up its relations with academics who now tend to favor less stringent approaches to copyright law.

In the months and years to come we’ll learn how successful this new approach is.