Russia Orders Pirate Party to Drop ‘Pirate’ From Its Name 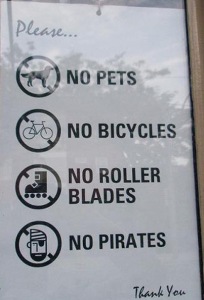 Due to diversities in culture, words that are acceptable in one country can sometimes be unacceptable in another. For example, sitting on a bum is something done every day by people in the UK but doing so in the United States would be an entirely different and controversial matter.

In Russia a battle over what a particular word means came to a close yesterday, with disappointment for a growing group with political ambitions. The contested word was ‘pirate’, a particular important one when you’re the Pirate Party of Russia, a group founded in 2009 on the heels of the Swedish Pirate Party’s successes.

The dispute dates back to 2011 when the Ministry of Justice told the party that it viewed the word ‘pirate’ not as a political ideology, but as a description of a crime. Not the copying or distribution of copyrighted material though, but the attacking and robbing of ships at sea.

The Russian Government’s political party naming directive seems to have the reasonable aim of stopping undesirables from showboating offensive campaigns, but its refusal to recognize that word that has multiple meanings resulted in the Pirate Party taking legal action. But in July 2011 a judge sided with the Government and the party was told to find a new name.

They refused, but in 2012 a change in the law convinced the party to reapply. Yet again a rejection was forthcoming, this time for various administrative issues alongside using the word ‘pirate’ in a way that did not “conform to the party’s goals and objectives.”

With one last throw of the dice, the party reapplied for registration in September 2013. Yesterday the government delivered its verdict.

This refusal to accept that ‘pirate’ has more than one meaning is a huge disappointment to the party.

“The Ministry of Justice said that piracy is a crime against public safety, specifically covered by Article 227 of the Criminal Code, i.e sea ​​robbery. Why they continue to persist with this obvious stupidity is unclear,” the party said in a statement.

“In our manifesto it is clearly written that we advocate the expansion of civil rights, freedom on the Internet, copyright reform and direct e-democracy. This is what we seek. That the Ministry of Justice continues to deny reality, claiming that we are sea pirates, is a violation of our legitimate right to association, to form a political party and to participate in the life of the country in a legal manner.”

While the Pirate Party has its stance the Ministry of Justice sees things a little differently, commenting earlier on its suspicions that the party’s position is “not to abide by the rules” set for everyone else.

“Perhaps the party is so innovative, so far out of touch with our reality, that it is quite difficult for them to perform primitive tasks,” the Ministry said.

With the government refusing to register the party with its current name but the party still refusing to change it, the road ahead is unclear.