In mid October the long-running dispute between BitTorrent indexing site isoHunt and the Hollywood studios of the MPAA came to a premature and dramatic conclusion.

Under incredible pressure isoHunt’s Gary Fung agreed to pay a mind-boggling $110 million to the movie studios and in exchange for all of his legal problems becoming a thing of the past.

And then, just this week, file-hosting site Hotfile’s battle with Hollywood also came – wait for it – to a premature and dramatic conclusion. The embattled cyberlocker decided it would be better to pay the studios $80 million rather than have an annoying trial hanging over its head. 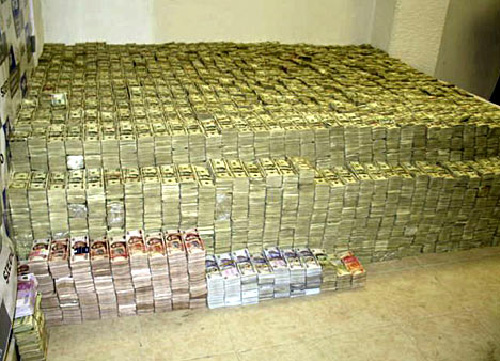 Unsurprisingly this new-found cash generating plan (which hasn’t paid off so well since grabbing $110m from TorrentSpy in 2009) has the MPAA so excited it’s ready to significantly up the ante.

According to sources the first pirate site admin to incur the MPAA’s wrath in 2014 will have to pay a cool $2 billion and hand over a chalice filled with the blood of his first born child. This event will be turned into a movie and subsequently cammed by pirates, with the MPAA collecting successive $2 billion settlements from every site that dares to show it illegally from there on.

While the above paragraph is clearly utter nonsense, it carries only marginally less bullshit than the claims that isoHunt and Hotfile together collected $200 million and gave it to the MPAA. Anyone who believes they did might also be interested in a bridge The Pirate Bay has up for sale in London for which TorrentFreak is currently collecting deposits.

These huge headline amounts are there to scare other site owners who might be considering embarking on the same path as Gary Fung and the mystical Anton Titov. For sure, both former site operators knew that but faced with financial ruin they were both forced into settling with the MPAA instead. Who could blame them?

Think about it though. They handed over $200 million to avoid being ruined. That suggests that they must have even more money than that kicking around. While Hotfile’s finances might be healthier than Fung’s, the chances of the site having $80 million kicking around are slim at best. And rest assured, isoHunt’s former operator has never, ever had $110 million at his disposal.

In fact, when we last spoke to Fung he was far from suicidal. He was cheerfully starting up his own clothing line, even though he was apparently a tenth of a billion dollars in the hole.

Last week Kim Dotcom put out a tweet in the topic, hashtagged #insider. He doesn’t believe the settlement amounts either.

So what exactly did he mean?

“All I can say is that I know the settlement number published isn’t what Hotfile will pay. It’s a PR number the MPAA uses to scare others,” Dotcom told TorrentFreak.

“From what I have heard about how the MPAA does it in their settlement agreements is that they require the site owner to agree to a list of activities the site owner can’t do for five years, like start a new similar site.”

That’s probably why Gary Fung is testing out t-shirts rather than getting technical with torrents. And if Dotcom is correct, torrents will be a thing of the past for some time yet, if the isoHunt founder wants to keep control of his own finances that is.

“When that time has passed the site owner gets a significant discount (often over 90%) and in the meantime the site owner doesn’t have to settle the full amount, but only lets say, 5% of it,” Dotcom adds.

The Megaupload founder says the figures put out by Hollywood have no basis in truth and only exist in order to spread fear among others.

“So the MPAA can go out there and issue a press releases about these ridiculous settlements, scare the shit out of every site owner that allows user generated content, while getting pennies on the dollar for those settlements. I can tell site owners with confidence that these settlement numbers are FAKE,” he concludes.

Seriously – at any point did anyone ever believe otherwise?