Why uTorrent Collects Info From Its Users

With 100 million active users every month, uTorrent and BitTorrent mainline have close to a 50 percent market share of all BitTorrent clients. Both pieces of software are based on the same code, which is developed by the San Francisco based company BitTorrent Inc.

A few days ago FastCompany reported that BitTorrent Inc. has started work on a new and quite intriguing project. The company has been gathering detailed statistics reported by uTorrent users in order to create an overview of the network speeds of nearly all Internet providers worldwide.

“We have download traffic, upload traffic, BitTorrent traffic, and we have HTTP traffic. So we can answer questions like: I live in this city in the world–it could be anywhere, literally anywhere–which ISP should I use? Which is the fastest? Which ISP is messing with BitTorrent traffic? Because we have this data, we can see the difference in speeds by time of day.”

For now, the results of this huge dataset are only visible to the BitTorrent team, but in the near future they might decide to open them up to the public. This would then allow people to look for the most BitTorrent-friendly ISPs in their area, and potentially avoid those providers that throttle traffic. A very rough graph is provided below. 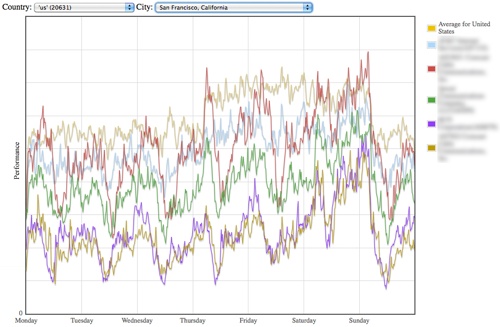 Although this kind of data can actually benefit BitTorrent users, the revelation by the BitTorrent team also raised concerns among a sub-group of naturally paranoid file-sharers. Graphing data by ISP and region requires uTorrent to send the IP-addresses of users to the San Francisco headquarters. This, in addition to detailed info on transfer speeds and download times.

Since the announcement a few concerned users asked TorrentFreak what data BitTorrent Inc. actually stores. A good question. The privacy policy posted on uTorrent.com says the following on the data collected via uTorrent.

“We also aggregate some data from our software applications (including µTorrent) regarding total traffic flows and content delivery performance of our Applications as well as other data collected in the use of our products or services in order to understand usability and monitor network conditions and compare the performance of Bittorrent and HTTP protocols on the public internet, it reads.

It further states that end users may opt out of providing this information through a preference setting in uTorrent (“send back detailed info”).

What’s not apparent from reading the privacy policy is what kind of data is sent back to BitTorrent Inc. In an attempt to find out more and address the concerns of some users, we contacted BitTorrent’s Simon Morris, who assured us that they value the privacy of their users.

“We restrict our technical performance monitoring to data which tells us how well our BitTorrent clients are behaving – we have no interest in and do not collect any more private data about what people are doing with their BitTorrent clients,” he said.

We wouldn’t expect to hear anything else, of course, but it still says little about the kind of data that’s collected. Morris said that a fuller technical disclosure may be an option, but that this has to be discussed internally first. He was willing to share 4 broad categories where the collected data falls into.

The above also includes the IP-address of the sender, which is used to compare the data across cities, countries and ISPs. To the more paranoid BitTorrent users this might sound worrying, but it is not much different from the type of data most websites on the Internet collect. If BitTorrent decides to post anything in public – which is not certain yet – all data will be aggregated and no individual information will be revealed.

Although we believe that every BitTorrent client should ideally provide a transparent and full disclosure of the data being logged, we are rather excited about the possibilities BitTorrent Inc’s plan offers. At the moment most ISPs are rather secretive about their bandwidth management practices. A speed comparison tool for BitTorrent users can therefore be a great help in choosing an Internet provider.

TorrentFreak will keep an eye on the developments, and provide an update and hopefully a preview of the project when more information becomes available.