Last week Cox filed its appeal arguing that the district court made several errors that may ultimately restrict the public’s access to Internet services.

This week it became apparent that the Internet provider is not alone in this assessment. Today, several industry associations, academic institutions, libraries and digital rights groups submitted amicus briefs to the court of appeals, voicing their concerns.

The submissions total roughly 200 pages, and the overall theme is that if the current verdict stands, many Internet providers and services will unjustly face similar liability claims based on an incorrect interpretation of the law.

The CCIA, which represents global tech firms including Google, Facebook, and Microsoft, submitted a brief together with the Consumer Technology Association (CTA). According to both groups, the district court ignored Supreme Court rulings which limit contributory infringement for service providers.

“An Internet service provider does not infringe copyrights merely by providing households access to the Internet,” the CCIA and CTA write (pdf).

“Yet the district court allowed such a case to go to the jury, and asked the jury only whether Cox ‘materially contributed’ to infringement in any of the millions of households to which Cox offered Internet access,” they add.

As expected, several stakeholders from the telco industries have also chimed in to support Cox’s appeal.

The U.S. Telecom Association, for example, urges the appeals court to reverse the verdict as it would require other ISPs to disconnect subscribers based on one-sided piracy accusations.

“The decision […] forces ISPs like Cox and USTelecom’s member companies to restrict consumers’ access to the internet based on nothing more than unproven allegations of copyright infringement in the form of invalid DMCA notices.

“It upsets the careful balance of the interests of copyright holders, internet users, and ISPs that Congress struck in the DMCA,” the Telco association adds (pdf).

Similar arguments were submitted in separate briefs by the American Cable Association and the Internet Commerce Coalition, with the latter highlighting the dubious nature of the millions of standardized copyright infringement claims some copyright holders send.

“If the decision […] is not reversed, conduit ISPs, when they receive unverified, machine-generated infringement claims from profit-seeking agents of copyright holders, will be strongly incentivized to cut off vital Internet service to users, rather than face costly damages suits.

“This is not the system Congress intended when it enacted the DMCA, and it should not be one imposed through a misinterpretation of Congress’s plain words,” the Internet Commerce Coalition adds (pdf). 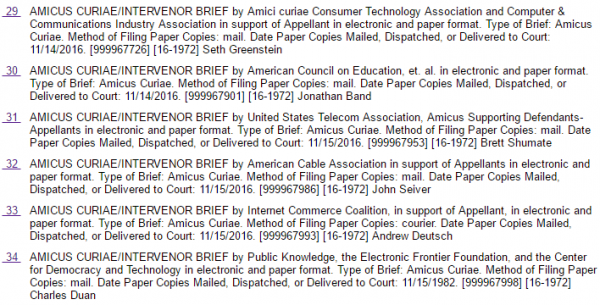 In their submissions, digital rights groups the Electronic Frontier Foundation (EFF) and Public Knowledge highlight the risk the verdict poses for Internet users at large.

“Just as a tenant’s water should not ordinarily be cut off when a landlord alleges nonpayment of rent, a subscriber’s connection to the Internet should not be terminated in response to alleged copyright infringement except in the most extenuating circumstances,” the groups note (pdf).

The district court’s interpretation of ISP obligations under the DMCA was too strict, they argue, and should be reversed. Not doing so could ultimately violate the fundamental right of people to have Internet access.

“Termination impedes the subscriber’s ability to exercise one of our most cherished liberties, the right of free expression. And termination potentially imposes those far-reaching effects on an entire household sharing the subscriber’s Internet connection.”

Finally, there is a detailed brief from several academic groups and institutions, including several library organizations. The American Council on Education and the American Library Association, among others, fear that educational access to the Internet may become restricted if the verdict stands.

“It could force educational institutions to restrict student access to the Internet unreasonably. Similarly, it could require libraries to limit broadband availability to people who have no other way of accessing information they need,” they write (pdf).

“The DMCA does not mandate a uniform repeat infringer policy, and such uniformity would conflict with the flexibility afforded under the Higher Education Opportunity Act,” the groups add.

The barrage of submissions clearly shows the importance of this case, and it’s likely that many more will follow. It is now up to the appeals court to decide if and how these opinions should be factored in.

With the stakes being this high, it would be no surprise if this case went all the way up to the Supreme Court, to clearly define ISPs’ obligations when it comes to processing DMCA notices and dealing with repeat infringers.

Interestingly, no amicus briefs have been submitted in support of copyright holder BMG thus far.