Most readers will not need to be reminded of the chaos that has surrounded the Popcorn Time brand this last couple of weeks, but for those needing a short summary, here goes.

The main fork of Popcorn Time, PopcornTime.io, is now dead. Previously sanctioned by the original Popcorn Time creator, the project in its most recent form is now consigned to history. In its place sits ‘Butter‘, a new project which aims to take the legal heat off the project’s developers but is less likely to become an instant hit like its predecessor.

Making matters worse, most variants of Popcorn Time relied on the YTS torrent site for their main movie content. That site has now been down for well over a week and will not be coming back. As a result the Popcorn Time applications installed on users’ computers are less useful than they previously were.

While movie companies around the world will have hoped that disenchanted users simply switched off Popcorn Time at the first signs of trouble and signed up with Netflix, life just isn’t that simple. There’s now room at the top of the unofficial streaming market for a new challenger and a group of programmers from Europe think they have such a contender up their sleeve. It certainly looks impressive. 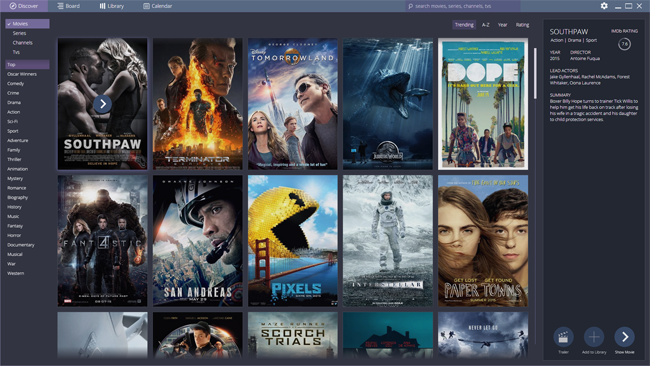 Under development since 2012, Stremio is hardly a newcomer. Back then, however, it was known under a different name.

“We always knew that torrents were a huge source of video content so we decided to try building an app that can stream torrents – for fun,” Stremio co-founder Ivo informs TorrentFreak.

“A few months later, we had our first prototype called Cinematic. The app was based on libtorrent, python and nw.js. We basically had a click-and-play movie catalog streaming from torrents.”

Cinematic utilized the Peerflix engine and Ivo says he loved what developer ‘Mafintosh‘ was doing.

“We helped with Peerflix as well as integrated it into Cinematic,” he explains.

At this point in its life Cinematic remained an unpublished project. “It wasn’t as polished or legally sustainable as we’d like,” Ivo says. But then another application with Peerflix roots hit the big time.

“Born out of Peerflix, came Popcorn Time,” Ivo says. “It was very interesting for us to see what was going to happen with their product.”

With Popcorn Time grabbing the majority of the headlines, Ivo and his co-founder continued work on their own software and last year had a breakthrough.

“In 2014 we focused on creating a general-purpose app that’s a movie/series browser, which provides content from different sources. Not just torrents. We started developing an add-on system to supply the content. That’s how Stremio was born,” he reveals.

“We left the development of our torrent streaming add-on to our community. Currently we have ‘Torrent Stream’ – a third-party add-on available if Stremio users want to enable it.”

While Stremio had the ability to pull content from YTS, that site is gone for good. However, in its absence it uses sites such as Kickass, Torrentz and others. It then augments the video content with artwork and data pulled from the world’s leading movie databases.

“Stremio associates every usable video file within the torrents with an IMDB ID. The beautiful thing here is that even if YTS goes off, and never recovers, this system will continue working with other sources,” Ivo says.

“It’s based on the Multi-Pass Torrent open-source software. In comparison to Popcorn Time, I think Torrent Stream and the way it works makes Stremio more content rich and reliable streaming from torrents, if you enable it and if it is legal in your area.”

In addition to pulling video from torrents (people can also post a magnet link in the search bar), Stremio is also able to grab recorded and even live content from elsewhere. 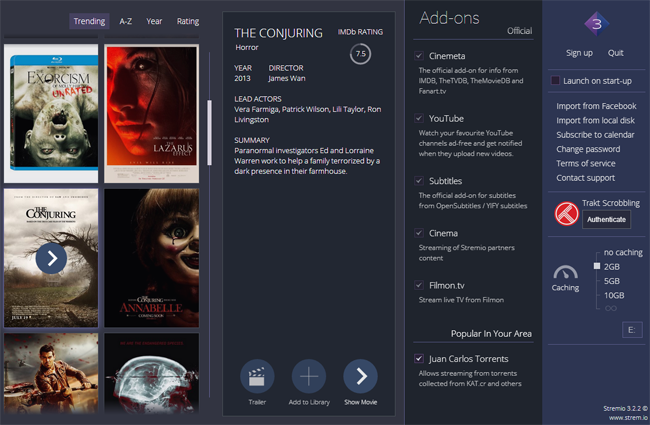 “Right now, Stremio’s official add-ons allow people to watch from YouTube and [live TV broadcasts from] Filmon.tv. We also have an add-on providing you with the cheapest legal source to stream a movie / TV show. You can also watch videos locally from a hard drive,” Ivo notes.

“Our plan for the future is to provide a one-stop place to organize and watch instantly all your favorite video content – movies, TV shows, video channels, TV channels.”

But in addition to merely viewing content, Stremio’s devs hope to assist users to remain both organized and mobile. The app already has a library feature to keep track of TV series and movies plus notifications and recommendations. It can also cast (work in progress) to Smart TVs and mobile devices.

Furthermore, since Stremio uses an add-on system (making it a little more like Kodi than Popcorn Time), third-party developers are free to chime in with their own ideas and tools for extra functionality. For those that way inclined, anime and adult add-ons are reportedly on the way.

“We’re also working on providing more official add-ons ourselves – in fact, we even have a TV show officially licensed for us now in the Cinema add-on,” Ivo concludes.

Stremio is still being developed (PC, Mac, Linux – partially open source) so can be a little temperamental at times. However, it illustrates perfectly where a Popcorn Time-style application can go in the future when plug-ins are utilized. Perhaps this is what ‘Butter‘ has in mind.

Update: Stremio has some infrastructure problems, possibly due to a DDoS attack. More details are available here.