In an ever-continuing effort to thwart censorship, The Pirate Bay plans to turn flying drones into mobile hosting locations.

“Everyone knows WHAT TPB is. Now they’re going to have to think about WHERE TPB is,” The Pirate Bay team told TorrentFreak last Sunday, announcing their drone project.

Liam Young, co-founder of Tomorrow’s Thoughts Today, was amazed to read the announcement, not so much because of the technology, because his group has already built a swarm of file-sharing drones.

“I thought hold on, we are already doing that,” Young told TorrentFreak.

Their starting point for project “Electronic Countermeasures” was to create something akin to an ‘aerial Napster’ or ‘airborne Pirate Bay’, but it became much more than that.

“Part nomadic infrastructure and part robotic swarm, we have rebuilt and programmed the drones to broadcast their own local Wi-Fi network as a form of aerial Napster. They swarm into formation, broadcasting their pirate network, and then disperse, escaping detection, only to reform elsewhere,” says the group describing their creation. 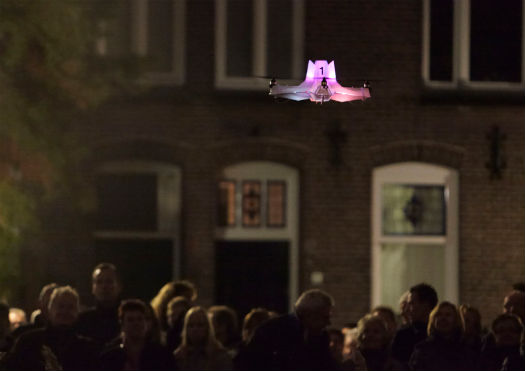 In short the system allows the public to share data with the help of flying drones. Much like the Pirate Box, but one that flies autonomously over the city.

“The public can upload files, photos and share data with one another as the drones float above the significant public spaces of the city. The swarm becomes a pirate broadcast network, a mobile infrastructure that passers-by can interact with,” the creators explain.

One major difference compared to more traditional file-sharing hubs is that it requires a hefty investment. Each of the drones costs 1500 euros to build. Not a big surprise, considering the hardware that’s needed to keep these pirate hubs in the air.

“Each one is powered by 2x 2200mAh LiPo batteries. The lift is provided by 4x Roxxy Brushless Motors that run off a GPS flight control board. Also on deck are altitude sensors and gyros that keep the flight stable. They all talk to a master control system through XBee wireless modules,” Young told TorrentFreak.

“These all sit on a 10mm x 10mm aluminum frame and are wrapped in a vacuum formed aerodynamic cowling. The network is broadcast using various different hardware setups ranging from Linux gumstick modules, wireless routers and USB sticks for file storage.”

For Young and his crew this is just the beginning. With proper financial support they hope to build more drones and increase the range they can cover.

Those who see the drones in action (video below) will notice that they’re not just practical. The creative and artistic background of the group shines through, with the choreography performed by the drones perhaps even more stunning than the sharing component.

“When the audience interacts with the drones they glow with vibrant colors, they break formation, they are called over and their flight pattern becomes more dramatic and expressive,” the group explains.

Besides the artistic value, the drones can also have other use cases than being a “pirate hub.” For example, they can serve as peer-to-peer communications support for protesters and activists in regions where Internet access is censored.

Either way, whether it’s Hollywood or a dictator, there will always be groups that have a reason to shoot the machines down. But let’s be honest, who would dare to destroy such a beautiful piece of art?