YouTube is used by millions of people worldwide to access a broad range of content but it is music that is increasingly one of the platform’s big draws.

With an almost unrivaled library, YouTube is the go-to service for music fans globally but over in Finland this morning, things aren’t playing out well.

As shown in the image below, users who try to access music are now getting the following graphic. When translated the text reads “Video content owned by Teosto. The video can not be used in your country.”

This is a pretty big deal. Teosto is a Finnish performance rights organization that collects royalties on behalf of local artists and composers. It represents around 30,000 local songwriters and publishers, small fry when compared to the three million foreign music entities it represents in Finland.

This means that YouTube must have pulled huge volumes of content from its platform locally, rendering the service far less attractive to users. However, according to a TorrentFreak source, things go much further than standard modern licensed music.

As shown in the image below, even music published in 1899 has found itself pulled from the platform. 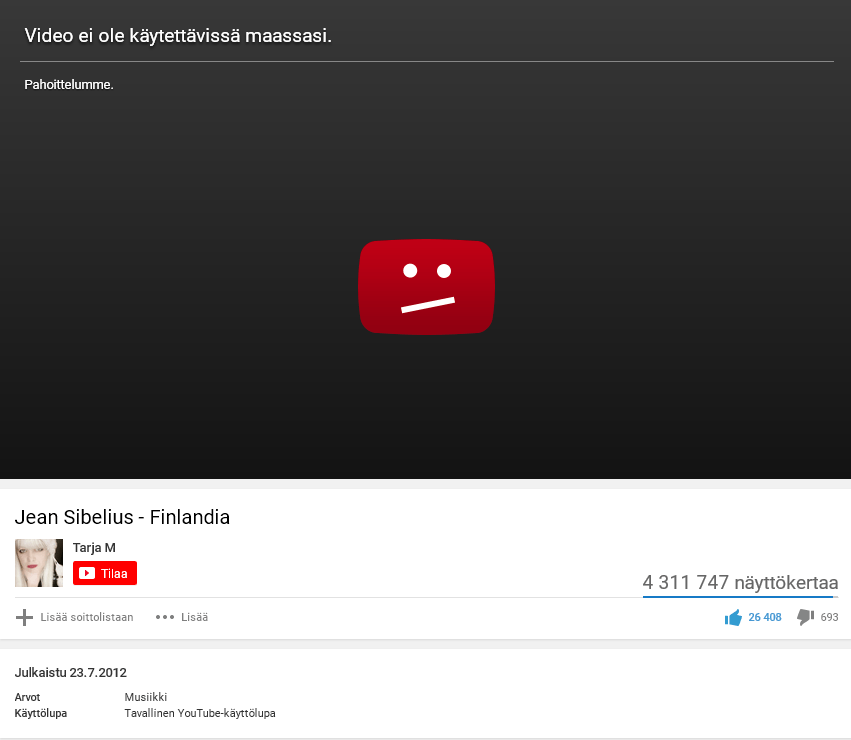 The music licensing dispute, which appears to have led to millions of tracks being rendered inaccessible in Finland, was confirmed by YouTube this morning.

“We were unable to reach a new licensing agreement with TEOSTO. Because of this, some videos containing music will be blocked in Finland,” the team said.

While the removal of content will come as a disappointment to the quarter of Finnish citizens who use YouTube regularly, it doesn’t come as a complete surprise.

In September, Teosto issued an opinion on copyrights to Parliament’s Education Committee. The licensing group complained that rightsholders aren’t adequately compensated for content played on platforms like YouTube. Like other groups in the same position, Teosto is looking to obtain more revenue for its members. That seems to be the basis for the dispute with YouTube.

For YouTube to have pulled so much content, negotiations must have really broken down, but Teosto sounded a note of optimism this morning. The group noted that while Google had indeed pulled music content from YouTube in Finland, it may reinstate it during the next couple of days.

Update: We have a statement from Sami Valkonen, Director of International Music Publishing Partnerships at YouTube – EMEA

“We are in active conversations to bring TEOSTO content back to YouTube in Finland. Our previous licensing agreement had expired so videos containing music represented by TEOSTO are currently blocked in Finland in accordance with copyright law. Talks are proceeding on good terms and we look forward to having great music back up on YouTube in Finland as soon as possible.”