Mid-June, one of the web’s largest YouTube conversion sites was hit with threats from Google. YouTube-MP3, a site with more than 1.3 million daily visitors, was threatened with legal action over its service that converts YouTube videos into audio downloads.

Google’s lawyers gave YouTube-MP3 seven days to comply, but in the meantime the search giant took technical measures to severely restrict its ability to operate. But weeks on it’s clear that YouTube-MP3 owner Philip Matesanz believes he has a cause worth fighting for.

Philip, a 21-year-old applied computer science student, today gave TorrentFreak details of his structured fightback against the US search giant in the hope that Google will give him the fair hearing that up until now he says he has been denied.

“I have to admit that have previously never sought case studies on Google’s legal position. Until now I thought they would understand that they cannot stop their users from creating recordings of a public video and would simply tolerate it,” Philip told TorrentFreak.

In order to precisely understand the situation, Philip recently sought the opinion of lawyers on the legality of YouTube-MP3 in Germany and its functionality in respect of the YouTube Terms of Service, an agreement Google says YouTube-MP3 breached. Philip spoke with two lawyers – Philipp C. Redlich of HÄRTING Rechtsanwälte and well-known IT lawyer Christian Solmecke from the Wilde Beuger Solmecke law firm.

Solmecke sent TorrentFreak a copy of his report this morning. He is absolutely clear on one of the main points, that YouTube-MP3 does not use the YouTube API. As a result “..YouTube’s API Terms of Service do not apply here, as no contract has been created which would allow for the Terms of Service to come into effect.”

So ToS argument aside, what about the inevitable copyright-related questions?

“Also, liability of the user’s for copyright infringement is not incurred because their actions are covered by the right to make private copies under paragraph 53 sub-paragraph 1 sentence 1 Copyright Law. The demand for YouTube-MP3.org to bring about a cessation of its service is therefore unfounded,” Solmecke writes. 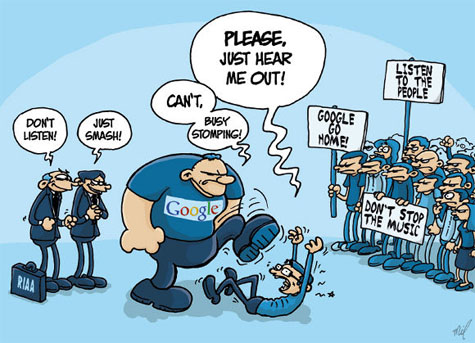 The report from Redlich’s is also detailed, noting that there are “..strong arguments in favor of YouTube not being able [to successfully] object to either the user or the provision of the MP3 conversion service, YouTube-MP3.org, on the grounds of an infringement of its copyright or of unfair competition.”

As long as YouTube doesn’t implement encryption to prevent storage of streamed content, doing so would be legal, Redlich adds, noting that the downloading of streamed content from YouTube for private use does not require the permission of copyright holders.

Whether or not Google will be prepared to change their position considering the developments above remains to be seen – thus far they haven’t been responsive to Philip’s lone voice. But would a few hundred thousand more make a difference perhaps?

Philip recently started a petition on Change.org asking Google to allow third-party recording tools for YouTube. The response from his userbase has been huge.

“I have started a public petition that already has more than 220,000 signatures even through it hasn’t been mentioned by any news site,” Philip explained.

“I didn’t expect such a great feedback. It is not based on any news coverage but on the strong will of my users who are spreading the word about it. I’ve already surpassed other petitions that received worldwide press coverage.”

So for now it’s over to Google to consider whether YouTube-MP3 is a potentially useful partner or one to be threatened and put out of business.

Interestingly, perhaps all is not lost.

An update from Philip is posted here.