If one had to create a list of the most influential torrent sites of the last decade, YTS/YIFY would certainly be among the top 10.

After arriving on the scene in 2010 the group shared more than 6,000 releases, on the way making YIFY one of the most recognizable piracy brands in the history of file-sharing.

Responsible both directly and indirectly for the sharing of countless millions of movies by millions of devoted fans, YTS/YIFY was bound to attract negative attention from the powerful businessmen of Hollywood. And, sure enough, in October 2015 the site disappeared, leaving only speculation in its wake.

Soon, however, the fog began to clear. Early November the MPAA confirmed it had shut down the operation, with its alleged New Zealand-based mastermind facing a multi-million dollar lawsuit.

Somewhat surprisingly the dispute with the site’s owner was quickly handled after he reached a private settlement deal with the studios. The terms have never been made public but several months on there are some interesting loose ends to tie up 11,600 miles away in the UK.

This may come as a surprise, but YTS/YIFY wasn’t just a website domain carrying torrents for DVD rips. It was in fact a fully registered company in the United Kingdom. On February 5, 2015, YTS (RE) Limited was incorporated under the company number 09424588. 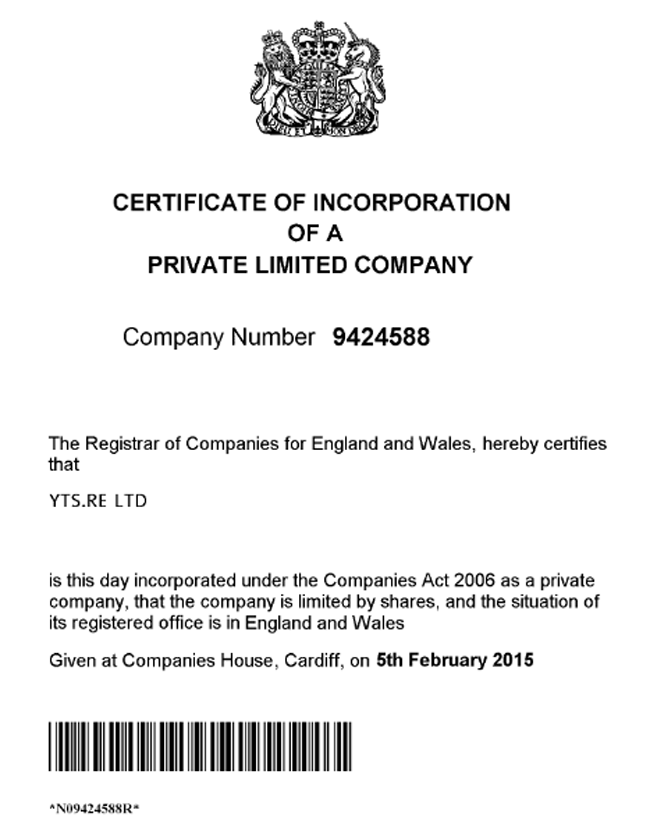 The company’s address in the UK is 20-22, Wenlock Road, London, but searching there for a torrent site would prove somewhat pointless. That location is a so-called ‘virtual office‘ that offers customers a London presence for a small fee, along with mail forwarding, telephone answering and fax forwarding services if required.

Born in 1994, the sole director of YTS (RE) Ltd is listed as a New Zealand national holding the somewhat predictable status of “programmer”. Presumably ‘torrent site operator’ would be a little too obvious, even if the company name gives things away somewhat.

Last Tuesday the Registrar of Companies filed its response to the official shut down request, confirming the closure of YTS (RE) Ltd in two months’ time barring any complications. 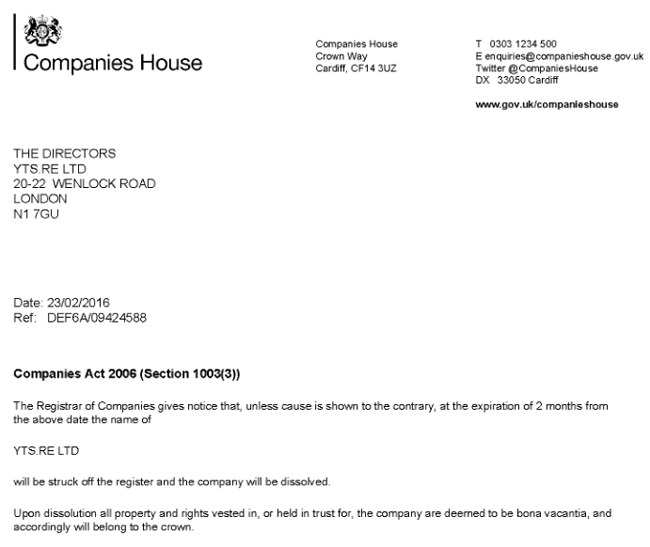 If the company has any assets at all one might assume they will have already been handed to the MPAA as part of the YTS settlement, as the site’s YTS.to domain already has. However, if anything is left over the ownership of those items will transfer to the state.

In line with tradition the application for strike off has already been published in The London Gazette (pdf), which to our knowledge marks the first time that a torrent site has appeared in the journal since it was first published in 1665.

Interestingly, YTS isn’t the only torrent site with roots in a UK company. EZCloud Ltd is listed in the site’s WHOIS details as the owner of torrent site EZTV.ag.